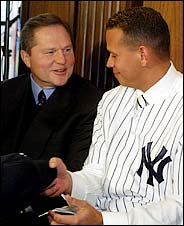 So while I almost always take a certain delight when things go awry for the Yankees, I can’t help but be concerned by the departure of Alex Rodriguez. See, in all the time he spend in New York, while Rodriguez was branded a loser and a choker, the Yankees looked like the bad guys. Then, when Boston won the World Series, Rodriguez, and his even more evil agent decided that was the perfect time to announce his departure, which is entirely uncalled for (just ask Peter Gammons). The Yankees, in this regard, stuck to their guns and said they weren’t going to negotiate with him, since he didn’t bother to even explore their offer. After such a terrible season, the Yankees look like the good guys.
But enough about the Yankees. What about the Twins? Well, A-Rod leaving is bad for the Twins on two fronts. First, by having his option not picked up by the Yankees, that also let’s the Rangers off the hook for a substantial sum of money, which, according to reports, they will use to sign Torii Hunter, who was about 1/5th of the teams offense this year, and the Twins are going to actually have to make roster moves in order to replace that. Heck, it may not even be as complicated as the Rangers getting more money. The Yankees could probably afford to pick up a new center fielder as well. Wouldn’t that make you sick?
The other problem is this. If there is a bidding war that fires up soon, that means teams will show just how much money they have, which, of course, means players will ask for more money, something Carl Pohlad would rather take to his grave than spend on making Minnesotans happy, if history is any indication. And what position gets the biggest boost in price? Why, third base, of course. And the Twins have been looking for a third baseman, seemingly since Gary Gaetti. Sure, they had Corey Koskie for a few years, but now would be a good time to find an improvement over the void there now.
So, I once supported Alex Rodriguez, but now, in affect, he and his evil agent have screwed over baseball, and specifically, the Twins.