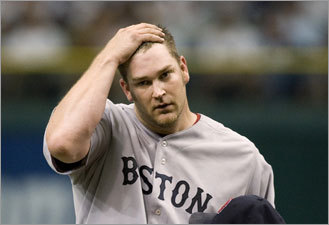 The Boston Red Sox play usually looks as ugly as the surroundings at Tropicana Field in Tampa Bay. Brad Penny looked much better than his last few outings and struck out 8 batters in the game, but he did give up 8 hits and 2 walks and 3 earned runs giving him his second loss of the season. MDC imploded in the game by giving up 2 hits and then hitting 2 batters in a row to give up his first earned run of the season. RR allowed his first inherited runner to score on the season but the run was charged to Hunter Jones so Ramirez still has an ERA of 0.00. Speaking of low numbers, Big Papi had another 0-fer on the day and is now barely hovering above the Mendoza Line at .208. Youk’s home run in the 8th put the Sox within 1 run but the Rays quickly got a run back in the bottom of the inning. Tampa Bay was running at will on Boston’s battery with 8 steals in the game including 6 by Carl Crawford.

The Red Sox now head to the Bronx for a series with the Yankees. Mark Kotsay suffered a calf injury in his rehab game with the PawSox so he will not join the team in New York.