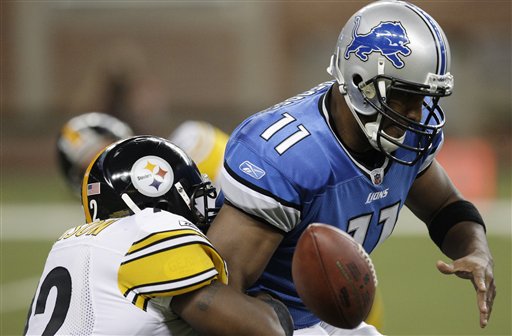 Opponent notwithstanding, it was good to get the record back above .500. Hard to believe that the defending champs haven’t been over .500 since early September (the opening day win over the Titans). The wails of fans hating the 1-2 record slowly die out when you’ve run off 2 straight wins and have the Browns on deck.

The Lions tried to be like all the cool kids, and wanted to have a 4th Quarter comeback against the Steelers of their own. But then they remembered they were the Lions, with Daunte Culpepper, and the Steelers decided to man up. 3 straight sacks after Detroit moved the ball into scoring position, and we have a harmless Hail Mary pass deflected by Ike Taylor that fell harmlessly to the ground.

It was another banner day for the offense, and I’ll take the defensive effort, if a mere 3 plays in a row in the final 2 minutes ends the game. But now it’s time to go deeper.

Sasso. Don’t look now, but before the Sunday Night Football game on NBC, Big Ben was leading the league in passing yards. He’s still now only about 160 yards behind Peyton Manning, and is still crushing the league in completion percentage. This game, he went 23-30 for 277 yards, 3 TDs and an INT. That INT went back for a touchdown. Sure, the defense is letting teams back into games, but also with the help of about one Big Ben flub a contest.  Take care of those, and he’s leading this team so well that the haters might have to stop hating. 4 of 5 motorcycle helmets.

Beetlejuice. Well, it was a good first half, at least. Mendenhall had a TD early, and another called back thanks to holding on TE Matt Spaeth. However, Mendenhall was only given the ball 6 times in the 2nd Half. He was running with ease in the first 30 minutes, channeling his successes from last week, but curiously was absent from the gameplan late. Why no Mendenhall, when he was running well and we were trying to eat clock? I know Ben has been efficient, and completed passes move the clock as well, but there was no real reason for the drop in using Rashard. Maybe we were trying to keep from exposing too much of him to the rest of the NFL, even though we have the Browns this week. Whatever…4 of 5 helmets for Beetlejuice, and 3 of 5 helmets for Arians’ use of Beetlejuice.

Hines. Sure, I could talk about any receiver here…Mike Wallace, Heath, whoever. But Hines just gets it done week after week, and shows everyone how determined he is to always be a fantastic, upper-echelon NFLer. 85 yards receiving is never really a stud performance, unless you’re watching how important each yard was. His TD catch was a simple throw, short of the endzone, and Hines outworked several Lions to hit paydirt. And the big thing…he caught all 7 passes thrown his way, after a few unlikely drops and bobbles last week. A perfect 5 of 5 motorcycle helmets for the vet.

Defense. I’m trying not to get too down on the sub-par late performances by this D until Troy gets healthy. The Lions had a chance to even the score late, but then we remembered that we’re the Steelers, and getting pressure on the QB is our calling card. Silverback had 3 sacks and a forced fumble, LaMarr Woodley shook off his early-season slump for 1.5 sacks, and Lawrence Timmons and Willie Gay got in on a few QB takedowns. Deshea missed about 2 interceptions, and we didn’t take advantage of all 3 Culpepper fumbles. There are still lapses like these that won’t be fixed until Troy comes back, so there’s no use getting bitchy about it. The D was only on the hook for 13 of the 20 points…you’ll take that any day. 4.5 of 5 motorcycle helmets.

That’s enough. You know how the game went down. We’re 3-2 and have the Browns next week. Some early Vegas lines have the Steelers as only 13.5 point favorites. I’m trying to decide if that’s an insult to our offense, or if they’re taking our current defensive efforts into account. Did they see the Browns only complete 2 passes and win with 6 points on Sunday?

KG: "The Wings are Coming"

The Globe's Frank Dell'Apa has this nugget from today's practice: "He took a lob and dunked it — it was an amazing dunk," Celtics coach...