So I have heard a few complaints from readers that you want more posts!  Unfortunately it is a very slow time of the year so there isn’t a ton to report; Spring Ball is now over, the academic year is now over, and the only news type stuff out there is mostly recruiting.  So without further ado, here is another Odds & Ends post (you’re welcome Babbitt)….

The Wazzu assistant coaches are diligently at work scouring Washington, Oregon, California, Arizona, Hawaii, Texas and Florida for future Cougs.  Per NCAA rules, 8 of 9 assistants are allowed to be out visiting high schools at any given time.  Don’t be surprised to see a few commits roll in over the next few weeks.  One target in particular to keep an eye on is Trent McKinney. McKinney hails from Mililani High School in Hawaii, and looks to be a great fit for our No Huddle Offense.  Take one look at his video below and you will see he is blessed with great athleticism and is similar to say a Vince Young or Jeremiah Masoli. According to Cougfan, his only current offer is still from WSU.

According to one Scout.com analyst, two other other Quarterback prospects to keep an eye on hail from the state of Oregon.  One is Class in the 2011 class, Brett Smith from West Salem High School.  The other Oregonian is 2012 prospect Alex Matthews who hails from Lake Oswego, and is the younger brother of Cougar Safety, Jay Matthews.  We haven’t had the best luck over the years with siblings (Trufant, Leaf, Long, Bledsoe, Grasu), but you know Jay and the Coaching Staff are putting work in on him.

Speaking of all the coaches hard work, it looks as though we recently chatted with Izzy Marshall, a OLB/Safety prospect out of Mountain Pointe HS in Arizona.

Wednesday afternoon Bill Moos joined the Ian Furness show on KJR, in studio for one full hour.  Furness and Moss discussed many things including the current state of WSU athletics, Moos’ past accomplishments (and Nike), Cougar baseball, facilities, Pac 10 expansion, a playoff system and of course, Paul Wulff and our beloved football team.  If you have some time give it a listen.

Rivals had a great read on rehabbing James Montgomery.  Regarding the potentially career-ending injury, Monty said “I had no idea what to think, my scar goes from the outside the bone outside the knee all the way to the ankle.  They were saying in a couple of more hours, once the ‘compartment syndrome’ moved past the ankle bone into the foot, that there would have been nerve damage and a lot of structural damage.  That would have gotten down to amputation time.”

Man it would be huge to get a full and healthy year out of Montgomery.  I wonder, if he isn’t 100% by the time we head to Oklahoma State, whether or not he would be granted a 6th year of eligibility to sit out and recover this year?  How huge would it be to have him in this rotation come Fall?

I am not sure if you saw it, but on Tuesday, The Sporting News came out with their list of the top Quarterbacks in the conference. While Jake Locker and Andrew Luck battled it out first first and second with the two writers, the young Jeff Tuel made Matt Hayes’ list.  Not only did Tuel come in ahead of UCLA’s Kevin Prince, but Hayes said, “One of the few bright spots for Wazzu last fall; he could be enough for three or four wins this fall.”  While this isn’t the “end all, be all”, it is nice to see WSU getting some props, instead of being relegated to 10th place in everything.  We’ve gotta start somewhere, right?

One other bit of football news.  Last Friday we took a look at who was the biggest Quarterback bust in the history of the NFL draft. According to our poll, JaMarcus Russell is the goat by a landslide!  Cheers to you Ryan for no longer holding this distinction (at least on a WSU blog anyway).  Out of 324 total votes, here’s the breakdown:

And speaking of Ryan Leaf, just this morning Steve Kelley had a feature profile on him in the Seattle Times.

And one last football note.  Per the Seattle Times, the University of Washington is no longer going to seek public funds for a renovation of their football stadium.

According to UW AD, Scott Woodward, “We want it to be as cheap as possible.  We are going to be as creative as we can to make that happen.”

Good luck with that…

Lastly, at least one baseball team in this state is a winner…

This weekend the Cougar baseball team heads to Palo Alto to continue their quest for back to back postseason appearances.  The sweep of the then 18th ranked Berkeley Bears last weekend put our Cougs in a 5th Place tie with Arizona (who swept Wazzu in Tucson a few weekends back).  Yesterday, Baseball America had the Cougs in the field of 64, just ahead of the University of Washington.  This weekend’s series, coupled with a home set against last place USC, followed by a road trip to Jackie Robinson Field in Pasadena are huge in determining our postseason fate, as we sit at 9-9 in conference play.

Hopefully we see lots of this (picture below), over the next few weeks!  Well, that is all for today, have a great weekend.  Go Cougs! 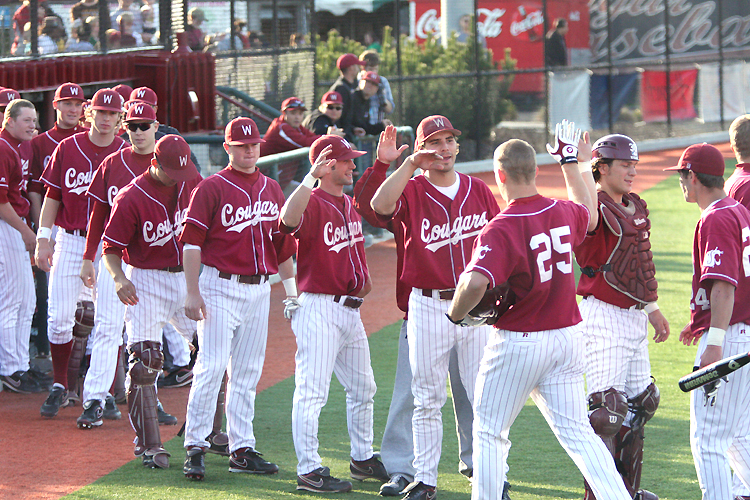