Kenneth Rucker, known to Red Wings fans simply as “Orange Hat Guy,” passed away at the age of 63 after suffering a heart attack. Rucker, a retired autoworker, had been a Red Wings season ticket holder since 1972. Last night, the Red Wings paid tribute to their loyal fan by draping an orange hat over Rucker’s seat, now also orange. The hat will remain on the seat for the rest of the season. [via Kris, @SnipeDangle] 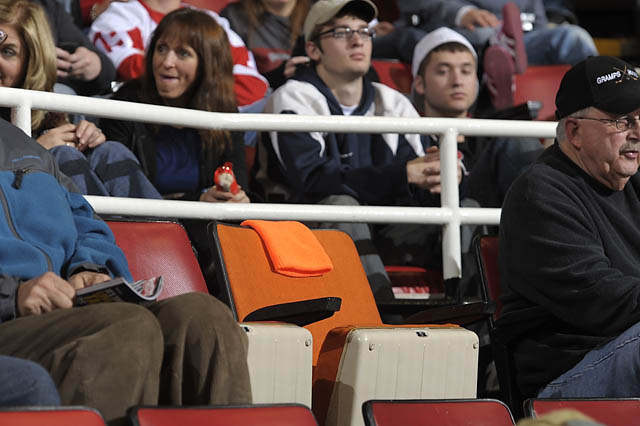 As for the Wings themselves, they rebounded from a sluggish 1st period to beat the Calgary Flames 4-2. Henrik Zetterberg and Nick Lidstrom both scored their first goals of the season, the latter coming just after a ridiculous stick-handling display from Pavel Datsyuk.

Todd Bertuzzi leads the team with 8 points in 6 games and is on pace for 110 points this season. While he probably won’t touch that number, you know he’s feeling good when he does this.

Check the rest of the highlights here.