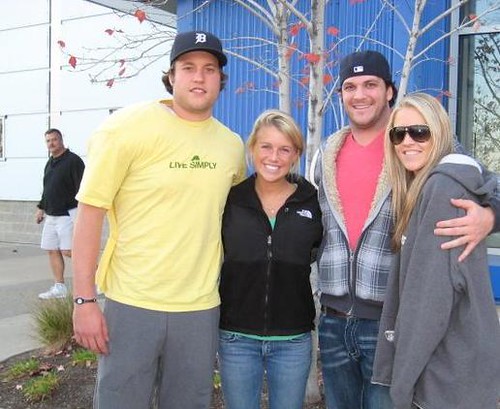 That’s Tom Kowalski in the background of this photo, peering around the corner to see if Matthew Stafford has a second to talk about his latest shoulder injury. Perhaps this picture was taken shortly before Stafford slammed a car door in Killer’s mustache.

Stafford’s newest throwing shoulder injury has been kept under wraps (ice wrapped in the pic), much like his other injuries, because … well, nobody really knows why.  The Lions do such a great job jerking its fans around every Sunday, it totally makes sense that they’d want to keep us on the edge of our seats throughout the week regarding the health status of our favorite player(s).

I understand that they don’t want to reveal info to their next week’s opponent, but Schwartz and the Lions are taking Stafford’s injuries to new levels of top secret. As a result, it forces fans to rely heavily on the beat writers like Kowalski, who are reporting things based off of “a source close to the situation,” and photobombing, ruining a perfectly nice picture in the process. Yes, they can easily crop him out, but it doesn’t have to happen like that!