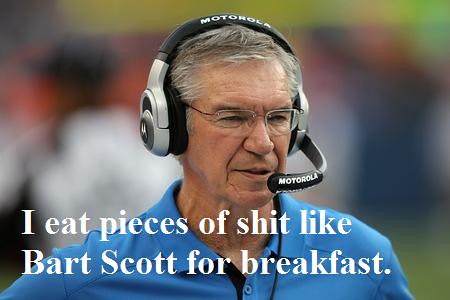 Jets linebacker Bart Scott was none too pleased with all that aggressiveness he had to deal with against the Lions last weekend, so naturally, he whined to the media, claiming the Lions played dirty.

Jim Schwartz kind of shrugged it off, but gave a jab of his own by saying, “consider the source.”

Bart Scott doesn’t have a starting job to talk about, so of course he responded to Schwartz’s response.

And, look what Bart did, he has awoken the beast, Gunther Cunningham, who pretty much chewed Bart up and spit him out:

“That’s what we do, and for them to call us a dirty football team really (expletive) me off. We play tough, we play hard, and we’re going to continue to do that, and we’re going to get better at that. And mister what’s his name? Scott? Maybe he can read that if you write it.”

I love Gunther Cunningham … not only for bringing defense to the Lions, but for calling Bart Scott out as a potentially illiterate nobody. Quit your bitching, Bart.