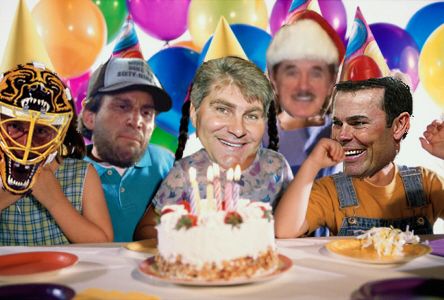 December 28th, 1960, Raymond Jean Bourque exploded out of the womb, took the puck down the side boards and fired a hard slapper past the doctor to put the Bruins up 1-0.

Maybe that is a slight exaggeration but we bet it went something like that.

Yes, 50 years ago today the legend known as Ray Bourque first graced the earth with his presence, his mother unaware of the greatness that had called her womb home for 9 months. In 1979 Boston drafted him 8th overall, and the rest is history.

If you’re at this site, you likely don’t need a history lesson on Ray Bourque. Scored his first career goal in his first career NHL game. He smashed Bruins and NHL records for defenseman during his career and is perhaps overshadowed in greatness only by the great #4 in a race that is much closer than we think.

He was an offensive beast and virtually impossible to beat on defense. His shot was so accurate and explosive that any woman sitting in the first three rows of a Bruins game instantly became pregnant. He epitomized class on and off the ice, and those of us fortunate enough to be old enough to understand his greatness while we were watching him are lucky.

It broke our hearts when he was sent to the Avalanche, but I dare you to find one person in Boston who didn’t watch Avs playoff games and root for Bourque to hoist that Cup over his head. Seeing Joe Sakic turn around and hand that Cup to Bourque was one of the great all time sports moments because Bourque deserved that lap with the Cup more than anyone. Anyone who says their eyes didn’t get a little misty watching that is a liar.

So Happy Birthday 50th Birthday Ray and thanks for all the memories!

After the jump, some highlights from Bourque’s fantastic career in the NHL….