The Internet is reporting that Daniel Paille is suspended four games for his blindside hit on some Stars guy.

Whatevs. It was a bad hit by today’s standards. Clearly no intent to injure but rules are rules. Sawada has a shoulder sprain — sounds like a shoulder-to-shoulder hit more than a head shot.

Fact remains that Paille was probably going to sit anyways since the Bs recalled Zach Hamill.

“You can’t be a hypocrite about it, though. I’ve thought about this a lot and had plenty of time to put things in perspective over the last year. Sidney Crosby has been very vocal about the head shots and blind side hits since he suffered one in the Winter Classic, but what did Crosby say after Cook hit Savvy last year. Nothing.” —Andrew Ference, earning more of our respect (CSNNE.com)

Kinda feel like the Bruins should’ve gone one head shot freebie since they may have lost Savard for good because of shithead Cooke. Oh wells…

Bruins send Stars to the hopsital
In other news, the Boston Bruins also sent Adam Burish and Krys Barch to the hospital. We’re assuming it was to get a consul on face reconstruction surgery after what Thornton and and Ference did to them last night. 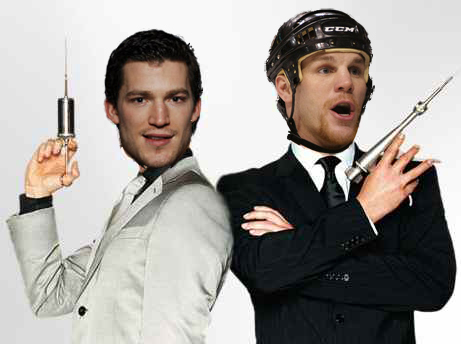 Too bad Ott wasn’t in the mix.