Do you really need a franchise goaltender?

Do you really need a franchise goaltender?

Since Ryan Miller came down with Dan Cloutier syndrome on Sunday, a lot has been made about the fact that teams are succeeding without “franchise goalies” – at least with some of the more naive Buffalo radio hosts. 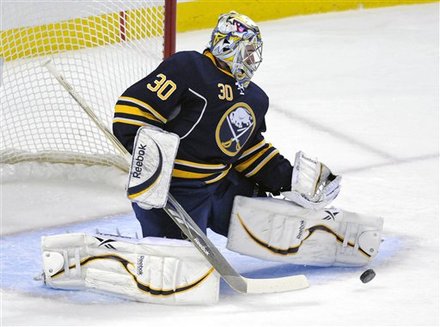 Many think that a franchise goalie will not win you a Stanley Cup.

The best example is the 2010 Cup Final in which Antti Niemi and Michael Leighton squared off in a very mediocre goaltending duel. What’s more is that the Flyers had reached the Finals on the pads of Leighton AND Brian Boucher (another backup). The conference finals did feature one true franchise keeper (Evgeni Nabokov) and another goalie that had been pegged as a future starter and is now acting as such (Jaro Halak).

So, the final four teams had ridden relatively unknown goalies to the Conference Finals and a similar situation had occurred the previous two seasons as the Red Wings had spent far more on their roster than their goaltending tandem. However, looking at past Cup finals, in the dead puck and post lockout seasons, the theory of building a strong team over having a true franchise goalie is not necessarily true. Here is a list of the past 15 Cup finals, with goaltenders listed:

Now, the pre-salary cap teams had a slight advantage, especially teams like Colorado (01) and Detroit because they stockpiled quite a bit of talent. However, outside of Detroit in 97, 98, 08 and 09; Carolina in 02, 06 and Ottawa in 07; each of these teams had secured a cornerstone-type goaltender. Even Ward could be considered as such due to his contract extension and the fact that the Canes had begun to fast-track his development.
The dead-puck era teams are dotted with legends like Belfour, Hasek, Brodeur and Roy. Again, I understand that many of these teams had bought up numerous stars to bolster their chances for a Cup. Nevertheless, each team identified a need for the right goaltender. As for the teams that succeeded without one in the pre-lockout days, Carolina and the Panthers were two small market teams, while the Red Wings have always built with strong star players up front before looking between the pipes – 2002 with Hasek being the exception with a veritable all star team wearing the Winged Wheel. Even Mike Vernon might be seen as one of those franchise players too.
Pundits will point to players like Halak, Tuuka Rask and Neimi as players who buck the trend. But they should realize that Rask was a highly-touted prospect and Neimi was signed from Finland to do exactly what he did for the Blackhawks, they simply ran out of salary cap space. Even Halak has been the beneficiary of a big contract, showing that the premium on goaltending is still quite high.

Looking at the state of the position today, I see more players with a ton of talent coming up in the league. Many of the players who are considered no-names now may very well cash in with a big pay day in a year or two.

The only difference in today’s NHL is that more teams have been able to find starters without spending over $5M. Yet, when I look at the top-eight in each conference (as of 2/17) only Philadelphia, Detroit and Dallas do not have what you might call a franchise goalie. In Dallas’ case, they have a former lottery pick between the pipes, so it is almost a wash. Every other playoff team made sure to address their need in net, even Tampa went out and got a goalie they knew could win in the post season.

If anything, last year’s final is an anomaly in terms of how each team is built. There is certainly credence to the fact that you can get by with a good goalie and well built team – as opposed to a great goalie and a team with slightly less talent. But, it would see the recipe for success is to ensure that your team is strong from the net out.