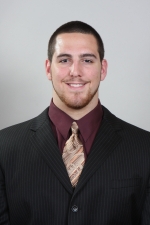 Projected Round:  1st Round

Speed: 5.23 seconds for a 40-yard dash isn’t by any means blazing, but it was one of the best times put up by offensive linemen (11th overall). As he won’t be asked to run down field, or beat corners deep, his 40 time will not tell fans and scouts much they didn’t already know, but by coming in and doing well, he did manage to solidify many opinions about him. His 40 result shows he’s got a natural quickness to him, as well as the determination to work at improving his speed. That type of self-motivation is always good in major OT prospects.

Agility: Catsonzo actually did himself a favor with the numbers he put up in the short shuttle and 3-cone drill. They were both one of the top 3 times for offensive linemen at the combine, and effectively seals the perception of him as a natural anti-thesis of speed rushers. He has a very good step off the snap and gets into position exceptionally well from both stances allowing him to get control of elusive defensive ends before they get around the corner and into the backfield.

Experience: Castonzo started all 53 games of his collegiate career including being the first true freshman in a decade to start at Boston College. He tallied 39 consecutive games at left tackle starting in his sophomore year and was a major cornerstone to the offensive production. He is a bio-chemistry major, and was nominated for a Rhodes Scholarship, and after football intends to continue his education, including setting up a research foundation. He is highly motivated, including taking it upon himself to actively work to bulk up and resolve earlier shortcomings.

Size/Build: Considered to have near perfect height for a prototypical LT, Castonzo has struggled to bulk up through his college years. He started out at 260 lbs. while playing RT as a Freshman, and there were some concerns as to how far over 300 he would be at the Combine. At 311 lbs. though, his size is much less of a concern than it was, but he is still considered “undersized” for his frame.  Adding more bulk would eliminate his biggest strength, though, so he will not likely bulk up considerably more unless asked to play on a power running team. Castonzo has good strength, but it is more the product of work and less the product of genetics. He can continue to get stronger, but he may be approaching his ceiling physically.

Pass Blocking: Castonzo is considered a premier pass blocker against quick defensive ends, and has the natural frame (long arms, big hands, etc.) to effectively slow down and stop edge rushers well. Castonzo is susceptible to bull rushes, though. His lack of bulk and natural strength, combined with his taller than average height leave him open to being walked backwards if he gets hit by a strong DE too quick off the snap. His solid technique, and exceptional reaction to the snap help to ease this concern, but this weakness could be a major point of opposing teams’ game plans.

Run Blocking: Castonzo lacks the strength and girth to simply out-muscle defensive linemen, but he has taken serious steps to work around this problem. Castonzo has worked at improving his technique and foot work so as to help him gain superior position on his opponents and nullify their weight and strength, allowing him to even the match. The combination of this technique and good burst off the snap gives Castonzo the ability to drive defenders back, but how he will fare against NFL linemen who are also good technically is yet to be seen. As the Colts don’t power run very much at all, being more of a finesse run blocker won’t matter as much, but he could be asked to bulk up some to help balance the disparity more.

Health: Castonzo has started 53 straight games with almost no missed snaps. He is neither currently injured, nor does he have any significant injuries listed through college as well as high school. Given his lower weight through much of his collegiate career, his durability is ever more remarkable. Injuries happen to everyone, but making it through playing against linemen that outweigh him by 30 and 40 lbs. while still playing nearly every snap says good things about his ability to stay healthy in the NFL.

OVERVIEW: Castonzo fits the Colts like a glove in so many ways. He is a very good and experienced pass blocker who relies upon technique and positioning to succeed. He also fits the lanky stereotype that Colts offensive linemen have assumed. With all the serious injuries the Colts have sustained in the past few years, durability could be a major selling point, but given the fact that “exceptionally durable” guys like Justin Tryon and Austin Collie missed multiple games this past year with “first injuries of their sport careers” it may be very moot point. Castonzo may very well be gone before the Colts pick, but his combination of high intelligence, a strong work ethic, and a very sound technique could make him a perfect fit for the Colts.