Mike Milbury turns a new leaf, pro-pansification of the NHL

Mike Milbury turns a new leaf, pro-pansification of the NHL 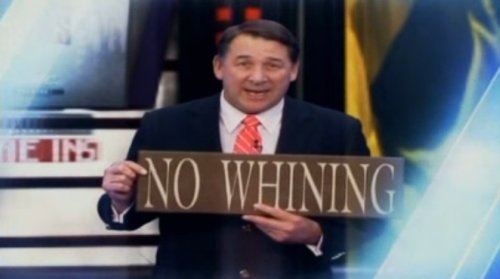 Love him or hate him, Mike Milbury is stirring up controversy — again. On Saturday’s HotStove segment (video), Mad Mike talked about the violence of collisions in the game and wanting to get rid of the “designated fighter” role.

Here’s our attempt at a transcript:

Milbury: It’s time to have a good, hard look at this. There are so many violent collissions now. Since the rules were changed in 2004, there’s been sweeping changes where speed is of the essence, here, and we know we have bigger, stronger guys, so the collisions are crazy. The defensemen in particular are totally unprotected.

Watch Kistopolas here. He can’t hold up the forechecker anymore; these guys are vulnerable. What is a cross-check to the head like that [referring to Lucic’s hit on Moore]? Well, in that case, it wasn’t anything. I’m not sure what’s what. This [Stuart hit] we all argued about, whether how long the suspension should be. The Bruins wanted Randy Jones banned from hockey for life, but on this one they thought four games on Paille was too many. Stephen didn’t get anything other than a little bit of a reprimand. Lagenbrunner, no problem, right? And right here Brown with an elbow to Keith, so the question is: What’s what in terms of violent collissions? How far does the league want it to go?

And this also has got to go one step further. We’re gonna have to include a discussion on fighting and the role of fighting. Earlier we talked about Taylor Hall today. Guys are now 6’8″; they’re huge.

Francis (off screen): What’s your point about fighting?

Milbury: My point on fighting is we have 25% of our concussions now setting a record-level of concussions. Some guys, like the best player in the game, potentially are not coming back for the rest of the year not from fighting but from concussions — 25% caused from this stuff.

Burish buried that guys face. You think Kochi’s gonna remember this with fondness — 6’8″ 235lbs (Chara) — and we have guys with over 20 fighting majors in the league. For what purpose are they there on the end of the bench? If you have people — and this is what got me about Gilles and I don’t want to get into an assessment of his abilities — but when you have the designated fighter on the end of the bench, and we still have them, I think it’s wrong and it’s time to take a look at how to get rid of that and what role there is in fighting.

Francis: Wait a second. This is a prime example of what concussions can do to people. Are you saying you want fighting out of the game, Mike?

Ron: I like the threat of the fight, simply to keep Sidney Crosby safe. Simple as that. I agree with you, the tough guy can’t sit at the end of the bench all night and be liked a trained dog and sent out to do the fight. He’s gotta play.

Francis: Wouldn’t you rather him fight than say Taylor Hall fight?

Milbury: We have fighting because we like it. Don’t tell me it’s to police the league. Here’s an obscenity I’ll put in the short form — BS.

Our take:
We think this is hilarious coming from Milbury. He complains about the pansification of the league one minute and then wants to pansify it the next.
Not sure how he’s making a corrolation between concussions and fighting. There are way waaaaaay more concussions coming from blindsite hits and hits into the boards than fighting. The only concussion from fighting that comes to mind is Horton’s bout with Peckham. And why did that fight start? Because Peckham threw a high elbow at Krejci. Mind you, Horton isn’t a figther. He can just throw some mean punches when proded.

If anything, these violent hits causing concussions is evidence that the NHL needs fighters in the league to stand up for teammates being bitched around. Otherwise, you have stars like Hall fighting, getting injured and being out for the season. Either way you cut it, a star has gone down for the season. We’d rather see justice be given then and there on the ice since there’s a 75% chance the league will screw up any suspension ruling.

Concussions will always be part of the NHL as long as you allow checking. If guys are allowed to slam into each other at high speeds, injuries are going to happen — concussions among them. It’s simple as that. If you want to see no concussions in the NHL you need to turn the NHL into women’s Olympic hockey — no checking, no fighting. And we doubt anyone wants to see that.

The league is better off on sending strong messages with their suspensions and softening the “protective” equipment.