In 2008, Mr. Belding couldn’t figure out what was going on with the Tigers seemingly stacked lineup. In 2009, Tom Selleck’s moustache nearly carried the Tigers to the division title. Last year, the Tigers season flamed out early, much like the career of Kenny Powers. This year, Bobby B took his show over to SB Nation Detroit where The Dude abided to do his preview. Meanwhile, back here at D4L, Rob emptied his (not so) deep pockets to get the (in)famous Barney Stinson to woo that sweet vixen we call the postseason back to Detroit. Also, if you’re offended by strong language or stronger sexual desires, you might want to question why you’re even here skip down to our other offerings. What uuuup, Tigers fans! You’re probably wondering why I’m taking time out of my busy schedule of hooking up with chicks and… yeah, not much else, to bring you this preview. Well, the answer is simple really: I’m awesome. That, and Robby R was an awesome wingman for me last weekend so I owed him a favor. Now that we’ve gotten that out of the way, I’ll take you through the Tigers lineup and rotation to let you know just how awesomely awesome these guys are gonna be this year. So suit up, and let’s get ready for that beautiful date we like to call “Opening Day.” (This is so going in my blog.)

The lineup (not to be excused with my lineup, if you know what I mean. Internet high five!)

I’ll just say it: Austin Jackson was the real rookie of the year last season. True story. He had 181 hits last season, 14th in the majors. He also stole 27 bases on 33 attempts. His defense is so blindingly awesome it makes grown men scream like little girls. He’s the real deal and he’ll make all you guys forget about Curtis VonWhatshisname when the Tigers win the division this season

Haaaave you met Will yet? He finally got his chance to play with the big boys last season and posted some solid numbers. His .304 average in 191 at bats gave him a big-time leg up over Scott Sizemore and Danny Worth in Spring Training. He’ll be the starter until Carlos Guillen comes back from injured non-awesomeness, but he’s hoping to stick around much longer. He’s a solid defender and his playing time will depend on how often he gets on base in front of the Tigers’ big bats.

Magglio’s season ended early last year (unlike this guy, of course) when he broke his ankle thanks to Gene Lamont’s totally not awesome decision to send him home on a play where he wasn’t going to score anyway. Fortunately for us, he’s back and should continue to hit .300 and drive in runs in the middle of the lineup. His power might take a slight dip as he recovers from said ankle injury, but his bat is still an invaluable piece to the Tigers’ chances this year.

This guy is going have a legen – wait for it – DARY season this year. He got into a little trouble down in Florida this spring, but come oonnnnn, who hasn’t? Once the big fella gets back to Detroit, he’ll be right back to the near-MVP form he was last season (and I was last night *winks*). He’s had 30 homers and 100 RBI in each of his three seasons in Detroit and he’s still only 27.

I won’t lie: when I first heard that the Tigers signed Victor Martinez, my initial reaction was an emphatic “WHAAAAT?!” However, I’ve gotten used to the idea (that’s what she said *winks*) and I think Martinez will be a good leader for this young team. Of course, adding another career .300 hitter to the middle of your lineup doesn’t hurt either. V-Mart will be counted on to be Cabrera’s wing man for the Tigers and drive in 80-100 runs while also catching a few games per week.

If there is anyone in the world that carries a bigger stick than I do (*winks*), it’s Boesch. He swings and misses quite a bit, but he’s a force when he gets into the zone. He hit .342 with 12 homers and 49 RBIs before the All-Star break last year, proving he’s no one-night wonder (shame though, those are usually the ones I’m a fan of…). If Boesch can regain his early season form, 2011 could be another long year for opposing pitchers.

Jhonny? Really? That sounds like an awesome name for a new addition to my playbook, but I digress. Peralta was a mid-season acquisition from the Indians last year who many fans didn’t think deserved the 2-year contract extension he received. However, he has the potential to be another 20 homer, 80 RBI hitter in what is already a pretty loaded lineup. If he falters, I doubt Jim Leyland will hesistate to bring in someone more awesome to take his place.

Ryan Raburn is kind of hit or miss (ha! get it?), a lot like my best friend Ted. When he’s on his game, he can get any girl he wants hits lots of home runs, but he can be really bad at times too. He’s got no defense (just like that girl at the bar last night, what uuuppp) but that’s what late game substitutions are for anyway. If he hits like he did in the last half of both 2009 and 2010 all season, Raburn could be a surprisingly big part of the team’s success.

Fans weren’t sure if Inge would be back with the Tigers at the end of last season, but Dave Dombrowski did some hard bargaining to make sure that Inge stayed with the team. He’s never been a very consistent hitter, but if he can contribute 20+ home runs and continue to play awesome defense, Dombrowski’s negotiating will be validated. If and when Inge’s knee give out on him this season, we could see Peralta shift over to 3rd while Ramon Santiago or Danny Worth slide into the shortstop position. 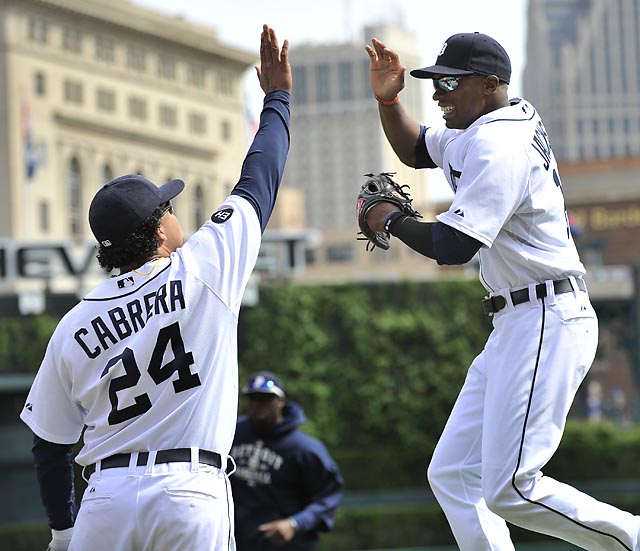 Verlander’s game is a sure thing, just like mine. He’ll probably start out slow in April (again, like me *winks*), but come May he’ll turn up the juice and start dominating opposing lineups like he’s done for the past five seasons. Look for 18 more wins and 220 more strikeouts in 2011.

Scherzer took a quick dip into the minors last season (something I’ve also been known to do from time to time) but he came back like a champ, putting up some of the best numbers in the league during the second half of the season. He should take a big step this season, giving the Tigers 17+ wins and a sub-3.50 ERA.

Porcello was NOT GOOD ENOUGH in 2010, also earning a trip to the minors at one point. Unlike Scherzer, he didn’t rebound with world-beating numbers, causing fans to worry about what 2011 might hold. I’m a bit concerned that the infield defense behind him won’t be as strong as his 2009 rookie season, which could hurt him a bit. Still, look for a bounce back season from Porcello with 13 wins and some strong performances down the stretch.

It’s simple, really. Brad Penny needs to stop being injured and start being awesome again. He was dominant at times when with the Los Angeles Dodgers, but injuries hampered him in both Boston and St. Louis. If Penny can’t stay healthy, be on the lookout for Andy Oliver to come up from Toledo, hopefully with better results than last year.

Coke is a talented lefty pitcher (or as I like to call it, “The Stranger”), something the Tigers’ rotation hasn’t seen since the Reagan administration. He’s making the transition from the bullpen to the starting rotation this season, which is kind of like making the switch from awesomeness (like me) to being lame and in a relationship like Ted. Starting pitching lasts a lot longer and is more important for the long-term, but you don’t get to close as often. If Coke can do what I can’t, the Tigers should be in good shape.

So you’re probably wondering how I think the Tigers will finish this season. To be perfectly honest, I’ll be watching for 92 wins and a World Series championship. True story. The White Sox are old, the Twins suck, the Red Sox are overrated and the Yankees are relying on Freddy Garcia to get them to the playoffs. It should be smooth sailing to the championship for the Tigers, and we’ll have all the high fives we can handle on Woodward Ave. in November.

Well, there you have it. If the Tigers follow my simple playbook for success, they will be winning more awesome games than your awesome mind could imagine this season. True story.