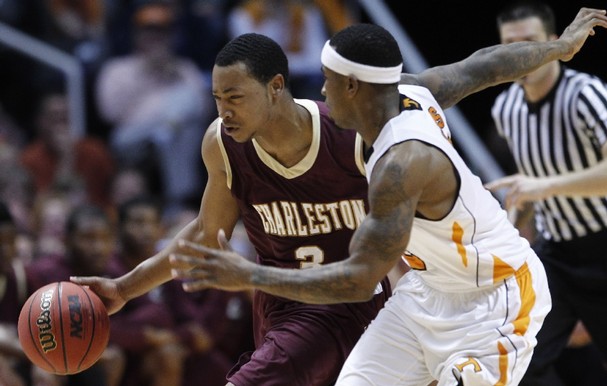 According to Andrew Goudelock of the Charleston Cougars, the senior guard will be working out with the San Antonio Spurs this week.

A below average athlete in terms of explosiveness by NBA standards, Goudelock excels on the NCAA level because of his tremendous shot-making ability and his ability to maximize his average quickness by setting up his first-step with jabs and fakes.

The biggest part of Goudelock’s offensive arsenal is his jump shot. With more than three-quarters of his shots tagged as jumpers by Synergy Sports Technology, Goudelock is heavily reliant on his ability to hit shots from the perimeter. Fortunately for him and his team, he’s knocked down some 47.1% of his total jump shots and is scorching the nets at a torrid 49.4% clip off the dribble. Just as good with his feet set as he is off the bounce, Goudelock has compact mechanics, NBA range, an extremely quick release, great perimeter footwork, and a knack for shrugging off defensive pressure and sticking to his form.

Using the threat of his jump shot to open up his midrange game, Goudelock’s lack of great size and quickness force him into some tough situations off the dribble, since he struggles to get all the way to the rim and turn the corner consistently—something that is reflected in his mediocre free throw rate.

Despite his lack of blow-by ability when he puts the ball on the deck, he uses changes of speed well and is shifty enough in the paint with his repertoire of crossovers, shot-fakes, and step-throughs to create ample space for his arsenal of high-effective floaters, runners, and step-back jumpers at the college level.

A creative force from the midrange, Goudelock takes and makes high degree of difficult shots from all over the floor. Seeing a limited number of attempts right around the rim due to his lack of great quickness, that shot-making ability manifests itself in his impressive body-control and renders him fairly efficient when he does get a look near the basket. The talented guard is not one to play above the rim, but he flat out gets the job done on the offensive end. (draftexpress.com)

Goudelock seems to fit the mold of what the Spurs look for in their guards. Just like George Hill who came out of a small college, IUPUI, Goudelock could be a surprise pick in the NBA Draft but let’s hope they work out big men just as much as they focus on guards.