A Conversation Between A.J. Pierzynski and Ryan Raburn

A Conversation Between A.J. Pierzynski and Ryan Raburn

Our scene is set during the bottom of the 3rd inning of tonight’s Tigers game against the Chicago White Sox. A.J. Pierzynski is batting with a runner on first and Ryan Raburn is manning 2nd base for the Tigers. 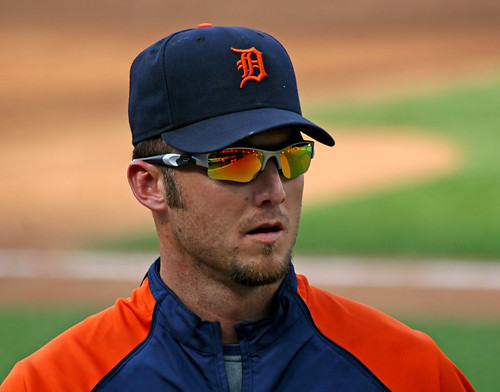 Raburn (thinking to himself while playing with a dandelion): Man, infield is tough. Usually when I’m on dirt, I either strike out or do something really embarrassing in the outfield.

The crack of the bat startles Raburn, as Pierzynski doubles down the line in left. Raburn meets Pierzynski at 2nd base.

Raburn: Hey man, nice hit! That one went farther than all of mine this year put together!

Raburn: Yeah, maybe one day I’ll be able to hit like a big leaguer. Oh well.

Pierzynski: Hey man, you at least have your defense to fall back on, right?

Meanwhile, Jhonny Peralta runs up next to Raburn with a huge grin on his face.

Pierzynski (quietly, to Raburn): Uhhh, what did he say?

Raburn (back to Pierzynski): Don’t worry, he just throws random h’s into his sentences everywhere. Just keep your distance or he might drool on you. (to Peralta) Hey Jhonny.

Pierzynski: Umm, thanks? (to Raburn) I’m still not 100% sure I know what he’s saying. Did he ask me for some hummus?

Raburn (back to Pierzynski): I don’t think so. He’s got some strange eating habits sometimes though.

Pierzynski (to Raburn): Dude, he’s seriously freaking me out.

Raburn: Yeah, I know but at he’s hitting well so we have to play him.

Pierzynski: Oh, so why are you in? *Laughs*