A Decade gone by- Dungy's Last Stand; A Week by Week Review of the 2001 Bucs Season

A Decade gone by- Dungy's Last Stand; A Week by Week Review of the 2001 Bucs Season 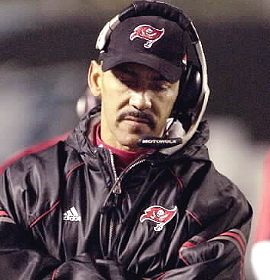 What an amazing time it will be next year when the Super Bowl Bucs come back home to regroup for their 10 year anniversary. Sadly however, that reminds us that it was ten years ago things unraveled here in Tampa for Tony Dungy, one of our favorite sons. Dungy deserved a better fate, a better warning, or even A warning would have been nice.

He woke up the morning of the 2001 Playoff game to a St. Pete Times Rick Stroud article saying he would be fired if he didn’t win the game. Ridiculous he thought, ” I will go directly to the Glazers and see what they say about this” …only the Glazers were nowhere to be found. They always fly in the front of the plane, but this time they weren’t on the Bucs plane? For a playoff game?

In his first book, Dungy talks about how he would have done things different had he at least known 2001 was a make or break season. That seems pretty reasonable; surely he would not have switched offensive coordinators once again, the 3rd in 3 years. But he did so thinking Clyde Christiansen would be the OC for years to come.

But the bottom line was the Bucs kept spending more and more money trying to get over the top:

1999) -after an NFC Championship appearance, Bucs trade two #1 picks to get Keyshawn Johnson, and signed Jeff Christy and Randall McDaniel from Minnesota.
2000) -After going 10-6 but an early exit thanks to the Eagles and two consecutive TD less football playoff games, Bucs spend big bucks to get Brad Johnson from Minnesota, and Simeon Rice from Arizona.

Surely another TD less playoff first round exit would not be acceptable.
It wasn’t.

Regardless of fault, it always comes down to the Bottom line. And once again, in 2001, the bottom line was the 4th consecutive season under Tony Dungy the Bucs started out 3-4, and had to crawl out of a hole rather than dominate and get home field advantage. Ultimately Dungy’s career would probably be quite different had the Bucs enjoyed a home playoff game in either 2000 or 2001 if not both, But that wasn’t to be.

Only a short time after scoring 3 FGs against the Eagles, Dungy was relieved of his duties.

This series is going to primarily recap the events of ten years ago…following the story of the Tampa Bay Buccaneers in the magical year of 2001, with a side bar of Dungy’s effect on the Bucs, and how the Bucs affected Tony Dungy.

I hope you enjoy the series, the insight, and the video!

PRESEASON-
Perhaps one of the biggest omens should have been recognized when new QB Brad Johnson gets an injury that keeps him out of training camp- a cut on his leg; from MOVING! Why a millionairee is moving his own furniture is behind me, but then again thats Brad Johnson for you. Brad’s not going to have someone do anything he cant do himself. But this caused a lot of missed time, and the offense suffered for it.

It wasn’t all Brad Johnson- Reidel Anthony had issues, Mike Alstott was coming back from his injury situation, punter Mark Royals wasn’t unscathed either. As a result the Bucs did not look particularly Crisp during the preseason, as a lot of starters on offense did not play enough with each other.
The Miami score looks like a lot of offense, but Shawn King and Rookie Hamilton from GA. Tech scored as backups. Miami won the game on a last second hail mary. Finally against New England did the Bucs score an offensive TD with Brad Johnson.  The Bucs looked like they had all the questions but no answers in the preseason finale losing 36-7 to Atlanta, although B Johnson to K Johnson resulted in the first score of the day.

Up Next: Season opener @ Dallas, the day before our world would change.