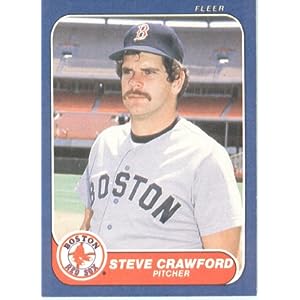 The Sox upped their record to 36-15 before running into an early June slump. Oil Can Boyd earned his sixth win of the year, 3-1 over Cleveland, with Steve Crawford hurling 2 1/3 innings for the save and rookie Rey Quinones driving in the winning run.

With the Celtics in the middle of their NBA Finals series with Houston, only 17,000 turned out the next night at Fenway as Boston took its fourth straight, 5-1 over the Indians. Mike Brown, who two years ago had been 1-8, threw seven innings for the victory, allowing  8 hits to run his record to 4-1. The Sox pounded out 13 hits, including 3 by Bill Buckner and 2 each by Quinones, Steve Lyons, and Rich Gedman.

The crowd increased to 25,000 the following night as Rob Woodward put down the Indians 6-4 to complete a sweep. It was only Woodward’s second career win. He allowed 10 hits and 3 runs, but Buckner and Quinones remained hot, each driving in a pair.

The Sox were now 21 games over .500, their best start since another magic year-1946. They had won 5 in a row and 9 of 10.. But with Al Nipper and Bruce Hurst on the disabled list, the starting rotation included the inexperienced Brown, Woodward, and Jeff Sellers. It began to show the next night in Milwaukee, as the Brewers went out to a 5-1 lead on Sellers and eased to a 7-5 victory. The Sox fielding was sloppy, with 3 errors, including a misjudged fly by Dwight Evans that led to 4 unearned runs. Late in the game, Lyons was thrown out on an attempted double steal, earning the anger of manager John McNamara, who said “he made a fool of himself.”

With Lyons on the bench the following night, Roger Clemens ran his mark to 10-0, throwing a four-hit 3-0 shutout to help increase the Sox lead to 5 games. Incredibly by today’s standards, Clemens threw 142 pitches. Wade Boggs knocked in all three runs with two hits as Roger survived three more Sox errors. Referring to Lyons, McNamara stated “I have no doghouses.” Dick Williams had said the same thing in 1969 and did not survive the season.

The win was only a temporary respite. The Brewers took the two remaining games by scores of 3-0 and 7-3, as Brown and Sammy Stewart joined the injured list. In losing 3 of 4 in Milwaukee, Boston bats suddenly went cold, with only 26 hits in the series. The same week, the Celtics wrapped up their 16th NBA Championship, besting Houston in 6 games.

As of June 9, the Sox were 37-18, 3 games ahead of the suddenly streaking Orioles. Clemens’ 10-0 record was tops in the majors, as was Boggs’ .395 average. Don Baylor and Jim Rice were still among the leaders in homers and rbi’s.

The Mets, meanwhile, were 37-15 and led their division by 9 games over Montreal.