﻿We’ve had a fun little ride here at Phins Phocus, taking a look back at the proud tradition of this franchise by unveiling the grea

test players in team history. It’s been a nice reminder in times like these. We haven’t seen the Dolphins win a playoff game in over a decade, and with the uncertainty of the lockout, we would probably kill to see them play in what we usually consider a meaningless preseason exhibition.

But all good things must come to an end, and it’s time to wrap up the series by selecting the All-Time Miami Dolphins’ special-teams unit. That obviously means the best kicker and punter in Dolphins’ history, but instead of boring you to death with a long snapper, I thought we would also try to pinpoint the top returner specialist to strap on the aqua and orange.

Olindo Mare (1997-2006): There isn’t much debate here. The Dolphins have enjoyed some outstanding kickers- Garo Yepremian and Pete Stoyanovich to name a couple. But Mare’s credentials for this honor stand alone.

He’s the team’s all-time leading scorer, and at one point in time during his tenure in Miami you could have made a case for Mare being the greatest kicker the game has ever seen, as he was temporarily the most accurate kicker in league history.

Mare also made an impact on kickoffs, frequently being one of the league leaders in touchbacks. His finest season came in 1999, when Mare was voted to the Pro Bowl and received All-Pro honors. 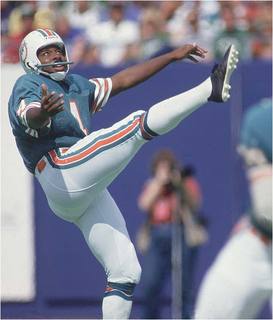 Reggie Roby (1983-1992): As one of the most decorated punters in league history, probably only the legendary Ray Guy ranks higher on the all-time greatest punters list. Roby was a three-time Pro Bowler, a seven-time All-Pro, and was voted to the 1980’s All-Decade team.

Two of those Pro Bowls and six of those All-Pro honors came in Miami. Unfortunately for Roby, punters and kickers aren’t seriously considered when it comes time to vote for the Hall of Fame. If that ever changes, he’ll be one of the first in line to get inducted.

Fulton Walker (1981-1985): He only returned one kick for a touchdown in his regular season career, but Fulton Walker, a defensive back in the early 80s for the Dolphins, was highly productive as a kick and punt returner. In five years in Miami, Walker returned 145 punts for 1,437 yards and 167 kickoffs for 3,779 yards.

He actually held the NFL record for punt return yardage in a season with 692 until Desmond Howard shattered that mark in 1996 with nearly 200 more. But what really makes Walker stand out in a crop of mediocre returners, was what he did on the league’s biggest stage in Super Bowl XVII.

The Dolphins ultimately lost the game, but Walker was phenomenal, returning the first ever kick for a touchdown in the Super Bowl with a 98-yarder in the second quarter and setting Super Bowl records with 190 kick return yards and a 47.5 yard average.