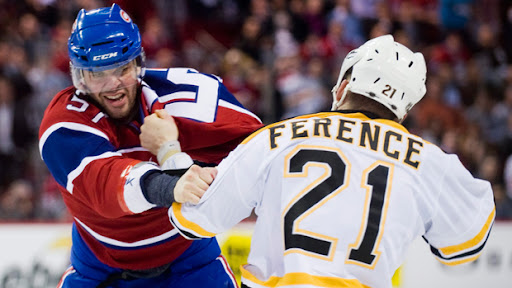 Mintues after the news broke that Michael Ryder will be taking his talents to the honky tonk hockey town, the Boston Bruins make a signing of their own. They inked (now former) Habs winger Benoit Pouliot to a one year deal worth $1.1 million, according to RDS.

Bs trade one former underperforming Habs player for another.

Some of you might remember Pouliot for his fight with Bruins “tough guy” David Krejci.

Or against Ference 3:16 where Jack Edwards calls him one of the “biggest disappointments in the National Hockey League history” and Brick calls him “gutless.”

Gonna be really awkward when camp starts in a couple of months.

His past season numbers:

Pouliot was an absolute no-show against the Bruins this year, so this isn’t a case of the Bs signing a Boston-killer by any means.

Our Take: We’re not a huge fan of this deal. Not sure why Chiarelli signed him. Our only guess is he’s there to put pressure on the other guys fighting for a roster spot. A safety-net signing, if you will.

Or maybe he’s there as a punching bag for the guys. Either way, he’s not fit to wear the Bruins uniform. He’s not Boston Bruins material.

Good news is that it’s a one-year deal for relatively little. The kid’s young and has some upside. This isn’t a huge gamble by Chiarelli and the signing looks a lot better than some of the contracts being thrown around out there today.

NHL Committing To Change On A Significant Day

The Best and The Most Famous Bodybuilders In The World

Bodybuilders are no less than famous actors and actresses in terms of fan following. Top bodybuilders in the world enjoy millions of fan (…)

The Floor Seat 18hr ago

This edition of NXT took place at the Performance Center in Orlando Florida with PC trainees in attendance. It was Night 2 of the Great (…)