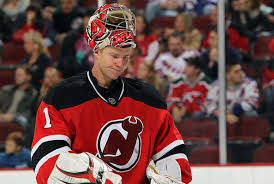 The Devils have reportedly agreed to a one year deal with back-up goaltender Johan Hedberg who became a UFA at noon today. Hedberg played the 2010-2011 season with the Devils going 15-12-2 with a 2.38 GAA, .912 save percentage and 3 shutouts. We are still waiting to hear the financial terms of both this deal and the 4 year deal with defenseman Andy Greene.

Barring a ridiculously high contract amount, signing Hedberg to one more year isn’t a bad signing, in and of itself. He certainly demonstrated that he can step up when needed and when he wants to. He’s a class act who slid seamlessly into the role of back-up goaltender after he was used to being the starting goaltender in Atlanta. Also, playing back-up to Martin Brodeur doesn’t come without its own pressures. Personally, I would have loved to have seen Lou Lamoriello sign a successor to Brodeur (whose current contract is up at the end of the 2012 season).

Hedberg’s 2.38 GAA and .912 Save % from last season with the Devils are his career best. Hopefully, he’ll improve even more this season.

The Green Bay Packers selected Rashan Gary of Michigan with the 12th overall pick in the 2019 NFL Draft. The coaching staff was very high (…)

This week, Shawn Anderson and Lou Olsen are joined by Slim Jim Phantom. The legendary Stray Cats drummer talks to the boys about (…)

We’re over halfway through 2020 and it’s been an interesting year. To quote the Grateful Dead, “What a long strange trip it’s been…” (…)

The start of the 2020 NFL season looms closer, with rookies reporting to training camp in just two weeks, and there’s still doubt as to (…)

Chargers running back Austin Ekeler is now the team’s featured workhorse, with Melvin Gordon having departed in free agency, but (…)

It’s been believed that superstar receiver AJ Green is very much in the Bengals’ long-term plans, as that’s been the word around the team, (…)

Scott Dixon of Auckland, New Zealand has had a fantastic start to the 2020 IndyCar season. Just how good has this been? Well, on Saturday, (…)

Second-place Lazio struggling in Serie A

It has been a solid season for Lazio in Serie A. Things were going great. They had a record of 21 wins, three losses and five draws for (…)

Gianluigi Buffon sets Serie A record for most games played