The Boys in red are officially on fire. Another big night with the long ball and suddenly the Angels are 7 games over .500 and still only a game out of first. Torii Hunter returned to life for one night and, along with Mark Trumbo, put on another fireworks show. What looked like a pitcher’s duel to start turned into a blowout by the end. The Angels actually made this one look routine. Decent pitching, good defense and timely hitting. If you’re the Angels you have to be a little disappointed the All Star Break is coming.

— Mike Trout got his first major league hit beating out a bunt in the third inning. Trout has ridiculous speed and ended up scoring two runs, one by hoofing it from first on a gap double by Maicer Itzuris. I think he is reaching a bit on balls away from him and the other at bats he pounded weak grounders out, but the talent is certainly evident.
— Joel Pineiro had me worried for a bit. After being staked to a 4 run lead Pineiro almost gave the whole thing back. There are times when Joel looks unhittable and then there are times where he leaves the ball up and gets pounded. A better hitting team than the M’s would have made him really pay tonight. Luckily, the M’s hit only slightly better than my son’s t-ball team.
— All those that thought when Michael Pineda struck out the first five batters of the game that the Angels were on the fast track to a no hit job? Yeah, me too. But Pineda is clearly still young and struggled when asked to hit his spots from the stretch. The scary thing is that he will get better and we will have to see him a lot more in the future.
— So is Dierks Bentley too good for the booth drop in? I have to say I was disappointed in the no show. I was all set for the Gubi silliness to occur but I guess country artists are less friendly than oversees pop stars. Sad Times indeed. 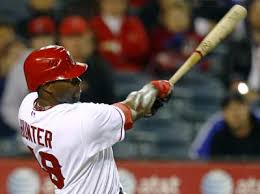 Now this is the Torii we remember. Look at his stat line for the night. 3 for 5, 2 home runs, 5 RBI’s, scored two runs. Just an awesome night. With Vernon swinging the bat with power and Trumbo starting to really heat up and now Torii, the Angels might actually have enough offense to stick in this race. Let’s hope this wasn’t a last hurrah type moment but a harbinger of a Torii Power Surge.