Tonight’s game is going to be no different from either of the two visits the Atlanta Thrashers made to Buffalo last season. The only difference will be the color of their jerseys and the name on the scoreboard. 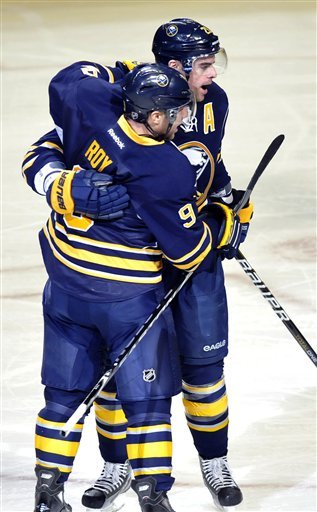 Still, tonight will be monumental for a reason other than the Winnipeg Jets flying back to Buffalo for the first time since the mid-1990s. This evening, Rick Jeanneret and Dale Hawerchuk will be enshrined in the Buffalo Sabres Hall of Fame. It should be a great ceremony as the last HOF induction I was present for (Andreychuk and Ellis) was quite stirring.

It is somewhat ironic that Hawerchuk will be inducted on the night Winnipeg returns to Buffalo. After all, it was with the Jets that Hawerchuk became a star. Of course, this is quite a different Jets team that will roll into First Niagara Center.

The Jets, who have struggled to find much consistency this season, will wrap up a seven-game road trip this evening. Winnipeg has taken seven of twelve points on the roadie despite dropping two of their last three (one in a shootout).

Buffalo is fresh off a back-to-back wins over Calgary and Ottawa over the weekend, two wins that put the Sabres back into the top eight in the Eastern Conference. Of course, the two-day lay off has brought a few teams back up to the Sabres in terms of points.

Jhonas Enroth played a big role in both wins, particularly Friday’s win over Calgary and has been quite good in relief of Ryan Miller as the team’s usual starter finds his way through a tough patch. Perhaps the best part of the two wins is that the rest of the Sabres roster has managed to pick up some slack from the Subway Line. While Thomas Vanek, Luke Adam and Jason Pominville have been held scoreless in the last two contests, the rest of Buffalo’s roster has managed to start finding the net.

Buffalo will certainly lean on their entire roster to find the net this evening. The Jets have had a few barn burners already this season (-10 goal differential on the season) but have tightened up the ship recently.

Tyler Myers and Andrej Sekera vs. Nik Antropov and Alex Burmistrov. Like Saturday in Ottawa, Lindy Ruff will certainly use more than one defensive pairing and one forward line to match Winnipeg’s two big scorers. The pair of Russians have 21 points (7+14) already this season and have been the most consistent offensive players for the Jets. Burmistrov’s agility plays off Antropov’s size nicely and the two seem to be establishing some chemistry. Obviously a sound defensive approach will be necessary to keep the pair quiet.