The Morning Skate: Enroth back in net against Sens

The Morning Skate: Enroth back in net against Sens

The Sabres will ice the same lineup they went with last Saturday in Ottawa as the Senators visit First Niagara Center for the first time this evening. 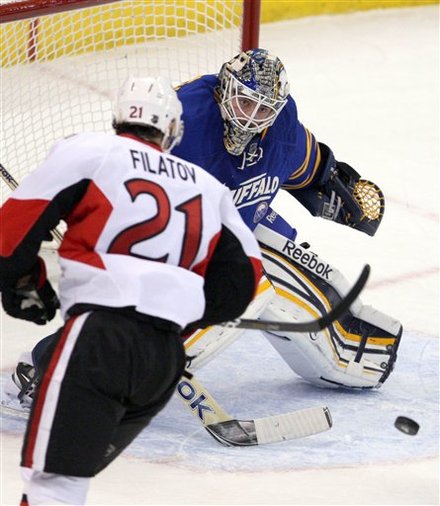 That includes the man between the pipes. Jhonas Enroth with get his fifth start of the season for the Sabres, his second-straight against the Senators.

It is a good choice by Lindy Ruff as Ryan Miller has a career 13-15-2 record against Ottawa.

The Senators will have their captain back in the lineup as Daniel Alfredsson will play his first game since suffering a concussion against the Rangers.

Buffalo’s special teams has powered the Sabres recently as the penalty kill unit has been bettered by only one team (Pittsburgh) and the power play has enjoyed a strong run despite not registering goals in every contest.

Buffalo enjoyed a shootout win over Ottawa last Saturday, despite yielding the game’s first goal and a tying goal on a poor defensive change in the second period.

The home woes have been halted for the time being as the Sabres have found a bit of mojo after opening their recent home-stand. This game marks the opening of Buffalo’s fourth set of back-to-back games and three games in four nights. All three games are against Northeast Division foes and will serve as an excellent chance for the Sabres to further cement a spot in the East’s top eight.

Highlighted Matchup
Michalek-Spezza-Alfredsson vs. the Buffalo defense. The Sabres defense was horrendous against Winnipeg, as was the d-zone coverage. Buffalo allowed Michalek to register an early goal last week before shutting down the top line. Still, the Sabres can expect a tougher night than Tuesday if they’re equally irresponsible in zone.