You want the Bad Guys? Welcome to the bWo!

You want the Bad Guys? Welcome to the bWo!

It started when Zdeno Chara introduced Max Pacioretty to his good friend Mr. Stanchion. It continued in the 2011 Stanley Cup Finals when the whiny, pansy, arrogant Vancouver Canucks complained that the Bruins were bullies. And it was again highlighted recently….

Ryan Miller pretends to have a pair of testicles for three seconds and gets brave enough to wander from his crease as he and Milan Lucic race for the puck. He thought he was safe. He thought no one would touch a supposed American hero (even though he blew the game against Canada in the Olympics on a shot that Thomas would have saved).

Everyone complained, but no one did anything. They couldn’t. The Bruins are too good and too tough. They had to sit there and take it but that didn’t stop them from complaining.

And then it happened…. 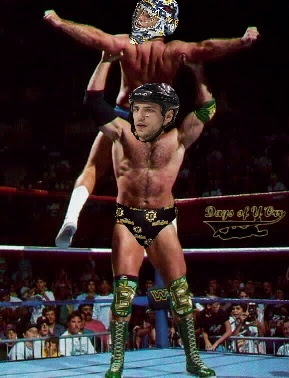 After the jump…. the dawn of a new era, a tougher era… a bigger and badder era….

Teams had been complaining about these “bully” Bruins for awhile now. Many used it as an excuse for losing to the Bruins, not realizing that saying the Bruins were too tough and too mean to beat makes you look like even bigger cowards. The Bruins had enough. They had finally decided to embrace it…..

With Miller down on the ice, Tim Thomas stormed out. As one of only two Americans on the Bruins,  many thought he was coming out to save Miller, to admonish his teammates for what they had down to Miller.

But the NHL would soon find out  Thomas was there to send a message. He wasn’t there to save Miller….. 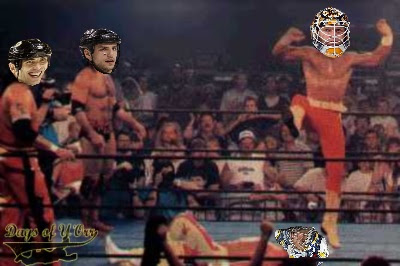 He crushed Miller. They were painted as bullies, as bad guys. And now the Bruins, with the destruction of Ryan Miller, were daring the NHL to stop them. 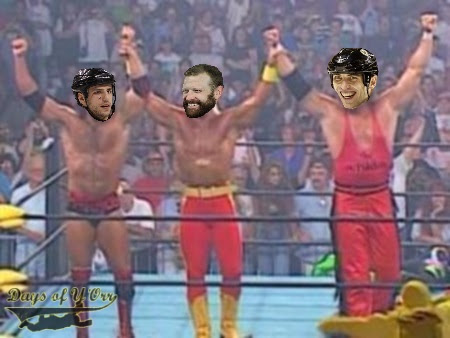 After the game the media sought Milan Lucic, looking for the slightest hint of remorse for what he had done. Instead Lucic told it like it was. He cut a vicious promo on Miller and the Sabres, telling them not to play with the big boys if they couldn’t handle the rough stuff. 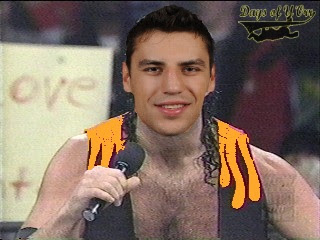 Boston’s actions sent shock waves through the hockey world. You wanted the Bad Guys? You got the Bad Guys. And on that night it was born….. 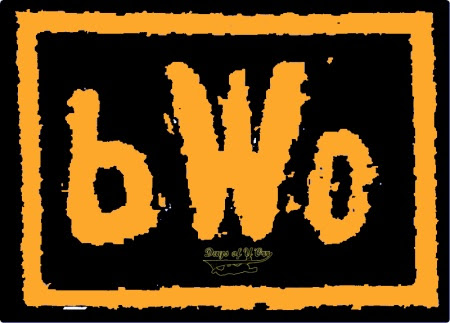 The Bruins went rogue. Fans and players alike from opposing teams complained about their brutality, demanding the NHL do something about these terrible, terrible bullies. But it was too late for the NHL. The Bruins had already taken over. 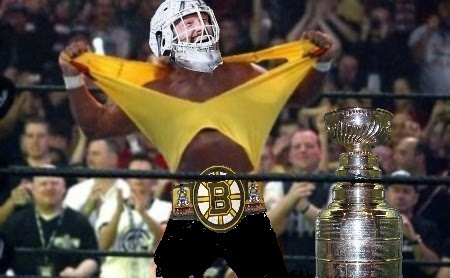 Conspiracy theorists and haters lined up. The NHL fixed the Finals, they said. The NHL favors the Bruins, they said. But the harsh truth is that no one, not a single player or team, could stop them. “The Bruins are bullies,” they cried. Bullies are people who pick on smaller, weaker opponents. These Bruins are not bullies. No, they are simply a tough as nails team that no one has the guts or the toughness to stand up to. 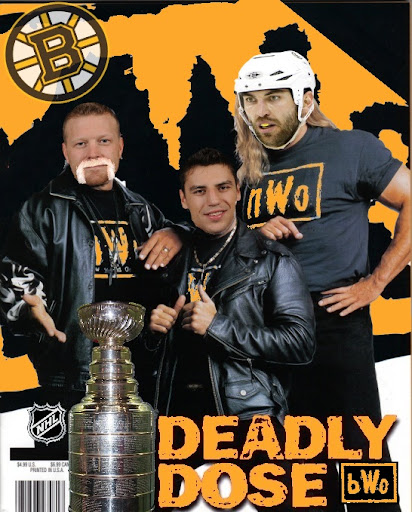 After a terrible start to their campaign the Bruins embraced the hate and entered November on a mission. Not only would they beat teams, they would beat them down and DARE anyone to stop them. Many have tried. All have failed. Fans and players cringe with disgust at each win, each thunderous check, each punch thrown. But their hate, their jealously fuels the Bruins. Every win is just one more for the Bad Guys! With every save the legend of the mighty Tim Thomas, the bWo’s backbone, grows. 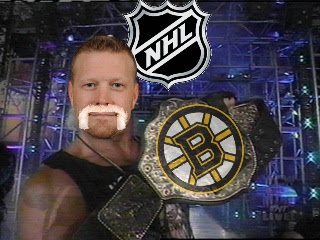 The Bruins have swagger, confidene, skill, toughness and enough hardware to fill a museum. They have what the rest of the league has but what no one can take from them without the biggest fight of their life. 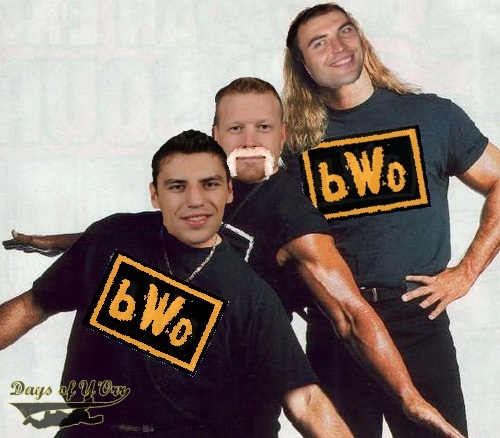 You can bash them, call them goons and bullies and jerks. They don’t care. They’re too busy making big saves, big hits and blowing up your scoreboard. They have talent that is getting better everyday, awesome mustaches and a coaching staff that knows how to press the right buttons. 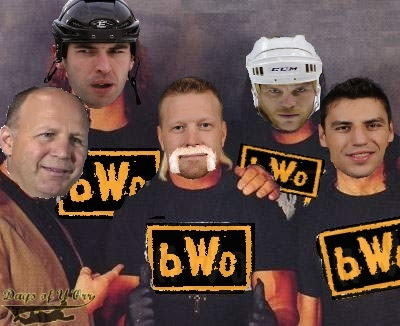 If you want to get your revenge, if you want to take them out… bring it. Come get them. They are ready. They won’t run, they won’t hide, they won’t complain. They’ll break your goalies and your faces with their skill and their fists. They are the Bruins World Order and they can’t be stopped. 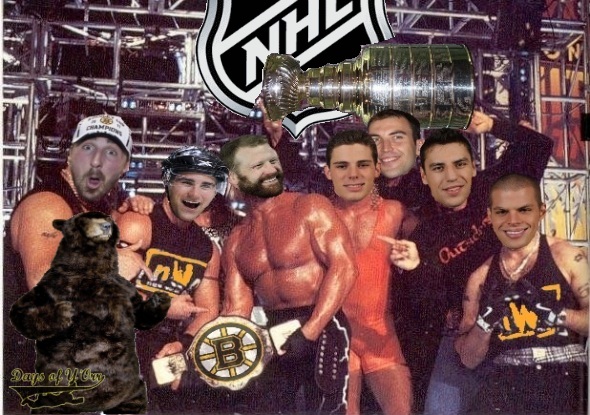 Hey Lucic….. thanks for making the final move to spark the full Bruins heel turn. We know we gave you a lot of crap early in this season but we’re friends again, right? 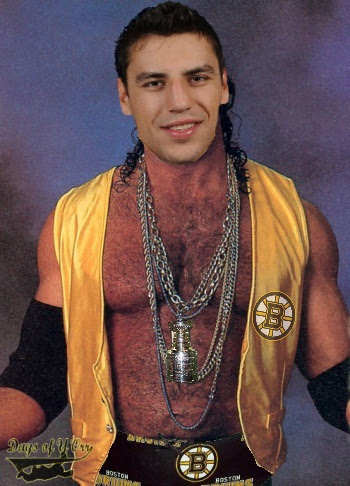 Thanks buddy. Nice chain by the way. Any words for any teams or players out there that feel the need to step up to you guys? 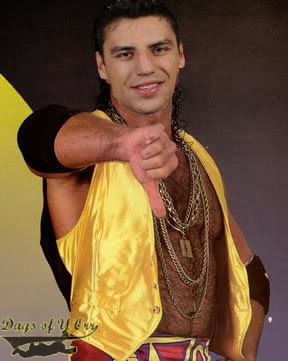 To all opposing teams, fans, management, etc…. if you don’t like the Bruins being bullies, if you’re sick of them being too tough for you… do something about it. Talk is cheap. There’s a new era in the NHL. The Bruins World Order has arrived. 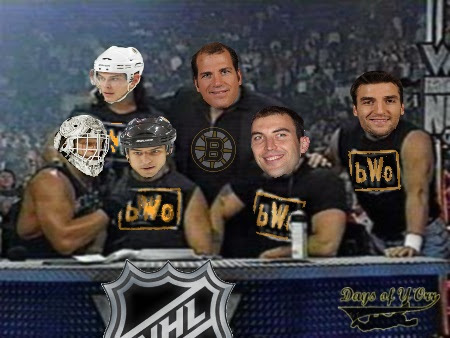 This season you’re going to see a lot of references to the “bWo” in our posts (note… while the ECW Blue World Order was awesome, this bWo is better). Like the Bruins, we’ve embraced the hate. We love it. We love the hate mail, the hate Tweets and the comments about our moms. We love the ridiculous conspiracy theories and fans of Vancouver, Montreal and Buffalo calling the Bruins goons despite the players those teams employ. The bWo is here. Deal with it. 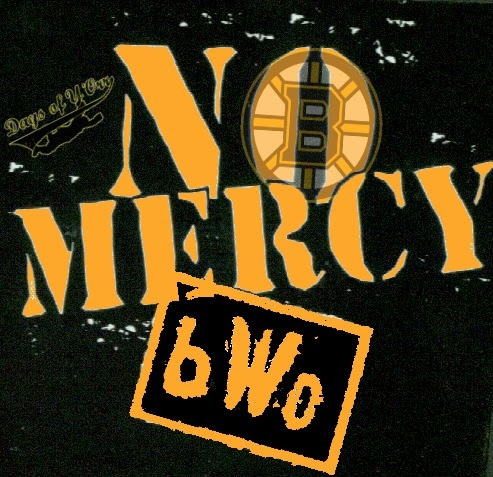 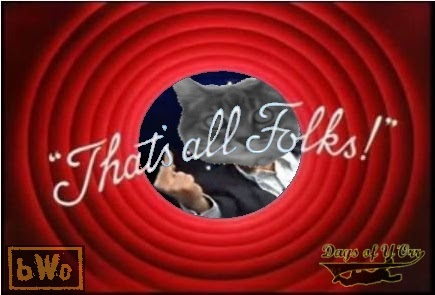