Comparing the Mighty Ducks to the Current(ish) NHL: A Case Study

Comparing the Mighty Ducks to the Current(ish) NHL: A Case Study

First, a quick explanation: this idea was conceived after watching the entire trilogy (yes, even D3) for the first time in like forever (ok, a couple years, whatever). Other people have probably done this before, but they were probably way too serious about it, something we don’t do well here at D4L. I picked the roster from D2 because it’s clearly the best movie in the triology. And you probably can’t tell me the names of those random kids from the first movie that didn’t come back for D2 anyway. Lastly, I tried to do this with just Red Wings, but it didn’t really work so well, so I expanded it. Deal with it. 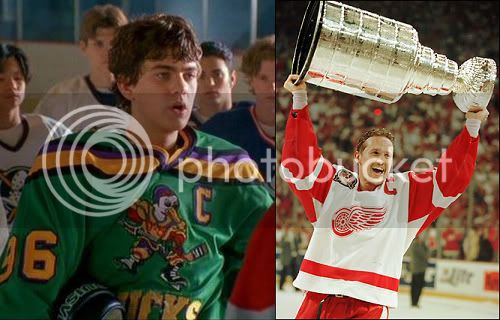 The Captain = The Captain. This was a no-brainer from the start. Both Conway and Yzerman led their respective teams to multiple championships and did it with class (other than that period during D3 where Charlie had a stick up his ass, but who can blame him when his mom is dating every man in the greater Minneapolis area?).

This was a tough one, and I didn’t want to go with a black guy just because Jessie is the token black guy (although Russ takes over that title in D3). Jessie’s distate for Adam Banks in D1 is way more interesting than anything he did in D2, so Ovechkin is a natural fit.

Click after the jump for the rest of the roster…

Neither one is very good and all they do is talk shit. Come on, you know Averman got on your nerves at some point.

Giant dudes who can’t really skate but can shoot the puck a thousand miles an hour? It’s like these guys are the same person. (Honorable mention: Jonathan Ericsson. Same reasons.) 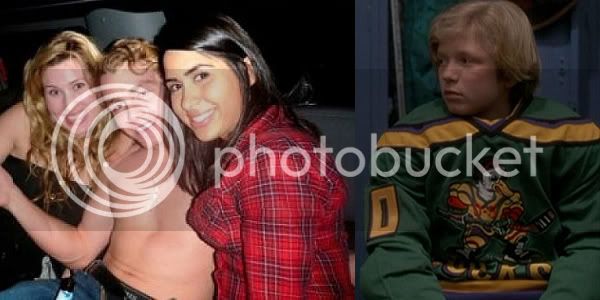 Two blonde guys that look like they’re 12 and are way more interested in banging anything that moves rather than playing hockey. And their names even rhyme.

Yeah, it makes more sense to go with a goalie here, but nobody is really watching either of these two because they’re good players. Julie and Patrick are easily the most attractive people in their respective leagues, so it was a natural fit.

Neither of them are very good, but instead just ride their teammates coattails to championships. (Note: I almost went with Chris Osgood here just to start some shit, but I didn’t have it in me to do that to Ozzie.)

Both are incredible puckhandlers and you can’t quite tell what they’re saying at times. Also, Datsyuk with a cowboy hat and lasso would be instant hilarity. 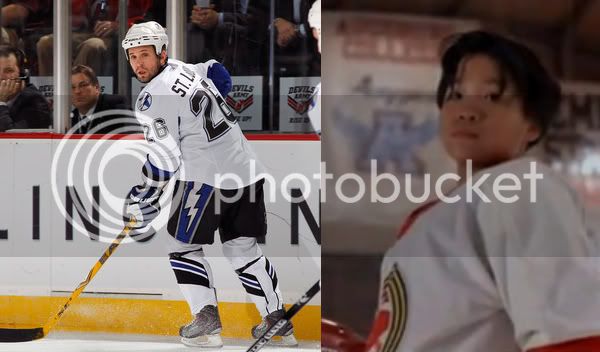 We only saw Wu play in like 5 games, but I’m pretty sure both have similar penalty minute numbers. Plus, they’re both 3 feet tall.

Both are fast, both have trouble with a specific skill set (Luis = stopping, Helm = scoring on breakaways), and both have a sizeable female fanbase.

While I’m not sure if Tyler has done much boating lately, I couldn’t let this one go by. All either one does is score goals and not play much defense.

Bigger than everyone else on the ice, cheap shot artists, and possibly retarded? Check, check, and check.

This one was tougher than you would think. While I almost went with Nashville’s Barry Trotz because of his ability to work miracles with a rag-tag bunch of losers (i.e. Bombay in the first movie), I couldn’t look past the amazing hair that both Bombay and Babcock possess. Plus, both guys have won a league title and a gold medal.