The Morning Skate: Slumping Sabres and Sens meet at FNC

The Morning Skate: Slumping Sabres and Sens meet at FNC

Two teams struggling to keep their head above water will meet this evening at First Niagara Center. The Sabres, who have struggle mightily at home, desperately need a win against their Northeast Division rival. The Senators haven’t been able to keep the puck out of the net lately as they’re in the middle of a similar slide as Buffalo. 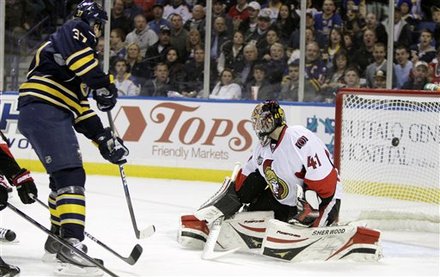 While Ottawa’s defense and goaltending have been spotty, they may get a reprieve against Buffalo. The Sabres have struggled to score more than once lately, let alone three or four goals. Ottawa has managed to find the back of the net despite their struggles. Considering Buffalo’s recent efforts at home, this game has the ability to turn into a snooze fest similar to Friday night.

The Sabres have been struggling with nearly every aspect of the game since the roster has been ravaged with injury. It seems Buffalo’s somewhat impressive depth has been worn thin with injury after injury. Some reports point to the Sabres receiving some reinforcements for tonight’s game. With Paul Gaustad and Pat Kaleta expected back, Buffalo’s penalty kill unit and generally grit should improve.

Buffalo’s first two games against Ottawa were wins. However, both came with far stronger rosters than the one Buffalo will ice tonight.

Buffalo special teams. The Sabres are still short on both special teams units. However, the power play still sports significant talent and has become terribly stagnant lately. Lindy Ruff noted more movement is necessary to create chances. It would seem a good night from the special teams units may equal two points for the Sabres.