Joe Dumars (eating a piece of fried chicken): Chauncey, my boy! Have a seat!

Dumars: Yeah, whatever. Listen son, you had a hell of a series against the Lakers and we need to get you re-signed before this next season starts!

Stuckey: Umm, right. Well Mr. Dumars, that’s why I wanted to talk to you. You see…

Dumars (interrupting): You should have seen how pissed Kobe Bryant was after that series. HOO BOY, I need a snack! [grabs a tub of fried rice off his desk and starts eating it with his bare hands]

Stuckey: Uhh, sir, I believe you are mistaken. You see, I was still in college when…

Dumars: Don’t try and bullshit me, Chauncey! You know that we need you here next season so we can defend our title!

Stuckey: Err, right. Well anyway, Mr. Dumars sir, I believe that I should get paid $10 million next season.

Dumars (choking on a bite of mashed potatoes): $10 million dollars?! We can’t afford that! Someone has to pay for my snacks! [reaches for a bag of Doritos] Stuckey: Well, sir, I had a pretty good season last year and…

Dumars: You know, I was hoping that that Red Wings guy would buy the team so I could get all the free pizza I wanted. You have NO IDEA how excited I was for that!

[grabs a 2 liter of Coke and starts chugging]

Stuckey (clearly disturbed now): Well, sir, I’m hoping that we can work out a long-term deal. I’m thinking something kinda like Tayshaun’s…

Dumars: OH MAN, and Tayshaun Prince! What an awesome playoff run that kid had! You know, I was hoping he’d do something like that when we drafted him and OH MAN CHAUNCEY DID YOU SEE THAT BLOCK! WOW!

Stuckey: Err, right sir. Anyway, even Jonas got a 4-year… 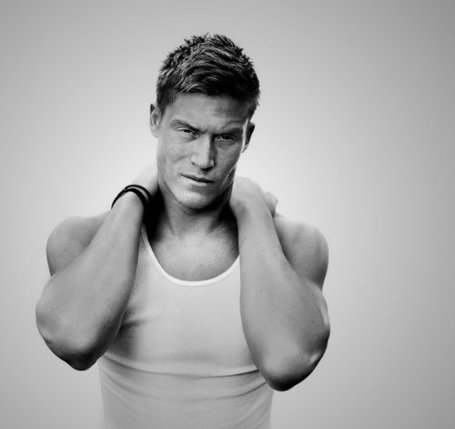 Jonas Jerebko: Did someone say my name?

Stuckey: Yeah, sorry Jonas. We were just talking about my contract.

Jonas: Oh, I sorry. I just finished my 3-hour Svedish full-body workout designed specifically to keep you as bootiful as possible. I’m going to rescue several adorable kittens from an animal shelter before the Moose Man and I work out again later.

[Jonas leaves and the spotlight shuts off]

Dumars: Who the hell was that?

Stuckey: It’s not important, sir. Listen, I was hoping that we could work out…

Dumars: Work out?! I can’t work out anymore, these knees are shit nowadays. Listen here, how about we re-sign you to a 3-year deal so that I can trade you for some over-the-hill superstar towards the end of your contract? [squeezes an entire bottle of barbecue sauce into his mouth]

Stuckey (trying not to vomit): Umm, sure. Whatever you say, Mr. Dumars.

Dumars (to himself): Haha, you still got it, you wiley old bastard.

Chauncey Billups (on the phone): Wait, what? We traded for who?

[throws his phone down in disgust]