As expected, the Michigan State Spartans are in the Sweet 16 after beating St. Louis yesterday. They will match up against Louisville in the next round, and will already be at a severe video bombing disadvantage. Michigan bowed out of the NCAA tournament early with a (slightly less now that they beat USF) embarassing loss to Ohio in the first round.

While signing Calvin Johnson to a contract extension was huge, the Lions restructured a few contracts to create more cap space. They then wasted used that cap space to re-sign OT Jeff Backus. Yay.

I think the word “panic” is overkill to describe the Red Wings’ current situation, but I’m drawing a blank on something more appropriate. The four game losing streak isn’t as worrisome as the ever expanding injury list or the division slipping away. At least Pavel Datsyuk played on Saturday.

One of my favorite things about March Madness is all of the other random tournaments that people think of, such as Rogo’s Greatest Tiger of All-Time tournament. Spoiler: Hank Greenberg got hosed.

Michigan extended its NCAA Hockey Tournament streak to 22 years by earning a #1 seed in this year’s bracket. In all, four teams from Michigan (including Michigan State) are in the tourney. If we’re lucky, we’ll see a Michigan-MSU Final Four matchup in the hockey hotbed of Tampa, Florida.

Things that are not surprising: Pau Gasol is a terrible singer.

With all of the other craziness in sports this week, the gazillion deals that took place before the NBA trade deadline flew under the radar. The Pistons didn’t get in on the fun, but at least Lawrence Frank isn’t bummed out.

The Portland Trail Blazers now have a 34-year old head coach and he looks like a total dweeb. 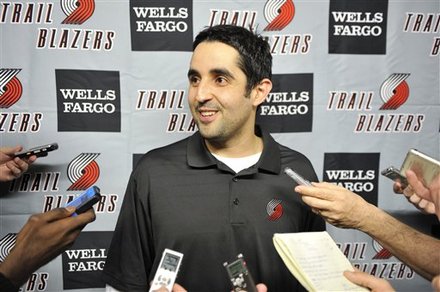 Finally, do the right thing and start your Monday off with a real donut, not a bagel.