The Importance Of Baseball In The Pacific Northwest 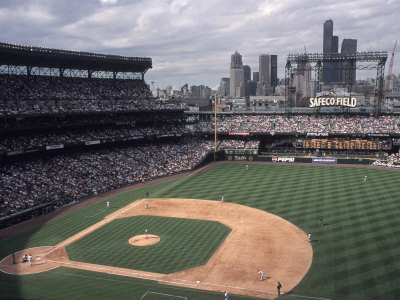 There are few things to cheer about during winter in the Pacific Northwest: a warm cup of coffee, sunsets over the Olympic mountains, any day it doesn’t rain. These are all gifts in their own right, but like many good things, they are fleeting, their effects only a temporary escape from the freezing rain and bitter wind swirling in from the Puget Sound.

And then there’s baseball.

Every calendar projects Spring to begin in March, but anyone from the Pacific Northwest will tell you that spring doesn’t begin until well into April around here. For me, Spring begins on Opening Day, rolls through perfect July and August days, cooled by the breeze from the sound, and lasts well into the seven month long rains that envelope the region.

For some, though, spring begins in February, as players arrive in Arizona, fans trickle south as well, escaping winter’s harsh grip and languishing in the ever forecast sunny and 70 degrees that the the Arizona desert provides during winter months. But for most, we have more than a month of frosted mornings and freezing rain before we get a sniff of pine tar or a glimpse of a fresh cut outfield.
Baseball in the Pacific Northwest is more than just the crack of the bat and roar of the crowd at Safeco Field (the house built from the rubble of that god forsaken Kingdome) it is more than hot dogs and overpriced beers, and not just a distraction from reality.

It is the relationships fostered for six months out the year: the bond between best friends laughing while they walk down 1st Avenue from their car parked ten blocks away, the father and son sitting on the metal benches in center field sharing a bag of peanuts, the couple sitting in the upper deck burned by the sun but could care less just because they’re together. That’s what baseball provides.
Beyond that, baseball is a rock we can lean on in our time of need, and at the same time a pillow to lay our head on. The countless summer evenings of coming home from a long day at work knowing that you can turn on the radio or television and baseball will be there; a reliability that is hardly ever found in another person, baseball provides.

The pure depth of our national pastime is evidenced by the varying contexts in which every fan can follow the game throughout the season. Some will check box scores after every game, flooding their head with averages and complex formulas that measure some sort of success or failure. Some will flock to Safeco like a Sunday congregation. Others will enjoy this great game from the comforts of their couch with a tasty local micro brew chilling their hand. No matter how one immerses themselves in the game, they will reserve a section of their heart and mind for it, a place that is left empty and unfulfilled without baseball.

I had my own journey away from the game, but came back to it with more fervor than ever once I rediscovered it. I became disinterested in the game after trying out for my school team in junior high and failing to make the squad. I realized that I was never going to be a major league player and that just showing up every spring for tryouts was not going to be enough to keep playing. It would required year round dedication and also resources for gear like a catcher’s mitt and leg guards, pads, etc. I also lacked any real support from my family which was struggling through an ugly divorce at the time.

After growing up playing little league every year since I was five years old, signing up for squads for fun, suddenly it became more than just a game; it was work and something that required discipline and dedication. At thirteen years old, this was too much for me. So my interests turned to other things, like music and girls.

My time without baseball continued all the way until college when I gained friends who shared an appreciation for the local sports that I had grown up with, including the Mariners. We bonded immediately. From there I became immersed in the 24 hour sports news cycle, as well a loyal follower of a few local blogs. Needless to say, I was hooked on baseball again.

By the time February rolls around here in the northwest, fans have hit a wall of sports withdrawal. This is due to a lack of major winter sports in the the region, especially since our NBA team was taken away. Also, there is seasonal depression which plagues nearly all residents in the area due to the inclement weather seven months out of the year; these are the same months of the MLB off season (assuming the Mariners don’t make the playoffs, which is a fair assumption most years).

However, hope returns for baseball fans in the region as spring arises and warms the frigid cold to a manageable sixty degrees with a fifty percent chance of showers. As April rolls around and opening day draws closer, the blue haze on the horizon fades to a teal with a silver lining and the stars shine like a compass rose deep into the evenings. Baseball in the northwest begins again and we all have something to cheer about.

Be sure to check out other great articles at Seattle Mariners Musings.

Over the past 10 years, the diet and fitness industry is one of the biggest multi-billion dollar businesses. Yet, we are still gaining weight. Dealing with...