Arena: Turnabout is fair play for Kevin Johnson and the City of Sacramento

With Sacramento losing leverage with the Maloofs, it's time to learn from the past and go on the offensive.

On Tuesday, our friend Tom Ziller over at Sactown Royalty wrote about the predicament the Maloof family has placed Sacramento in with regards to building a new downtown entertainment and sports complex.

The Maloof family has the city between a rock and a hard place.  Although they killed the deal for a new ESC, they can also dictate that the city cannot construct another building worthy of housing a professional team because of a provision in the 1997 loan documents with the city.

“New Arena Right. Tenant shall have the right to terminate this Sublease without any further obligations hereunder if the Kings will not be the prime user in any new arena capable of being the home venue of a major league sports franchise which is approved, developed, or financed in whole or in part, directly or indirectly, by the City or the County of Sacramento, under terms mutually agreed upon but in any event no less favorable than terms offered other major league professional sports franchises playing or planning to play in home venues in the Sacramento Standard Metropolitan Statistical Area (“SMSA”) or Yolo County.”

So Tom is right, the city is in a pickle.  The city can’t push forward with a new building, unless they want to let the Maloofs off the hook for the nearly $70 million they still owe in municipal bonds.

While this is an unfortunate situation, it is not all that different than the one the original owners of the Kings faced when moving the team from Kansas City in 1985.

Some of you know the history of how the Sacramento Kings became the Sacramento Kings.  Maybe you have done your own research or possibly watched the documentary film Small Market, Big Heart.  There is an interesting parallel between then and now.  One side is hungry to get something accomplished, while the other is content just playing the waiting game.

Before the Sacramento Kings could exist, there had to be an Arco Arena.  The NBA wouldn’t let the team move to Sacramento without a place to play.  The City of Sacramento wouldn’t allow a building to be built where the current arena sits due to zoning rules.  So former co-owner Gregg Lukenbill and his team of investors had to get creative.

“We had to get a building built here,” said Greg Van Dusen while sitting in front of Arco I during the filming of Small Market, Big Heart.  “And we couldn’t get zoning where the current Arco is because it was in the city and the city was not in favor of the whole thing.  So the owners bought this piece of property right here, which actually borders.  It’s in the county, but not in the city and it borders the city on two sides.  It’s kind of a thumbing your nose piece of property.”

The original Arco I building, which still stands today, was originally permitted by the county as a warehouse – a really big warehouse.  The city wanted nothing to do with converting the Natomas area from unincorporated farmland into commercial and residential real estate, so it ignored the group who was trying to land a professional sports franchise.

Lukenbill and his group did the unprecedented.  They built a temporary building to get the team in Sacramento and almost immediately began working on the permanent building – the current arena that is now known as Power Balance Pavilion.

How did they get permission to build that second structure?  The city had no choice.  The Kings were a rousing success and getting in the way of the second building would have been political suicide for Mayor Anne Rudin and the Sacramento City Council.

Two buildings, built within 300 yards of each other, in a little over three years time without public money or even government subsidies.  Pretty impressive feat.

That original group that brought the team to Sacramento were visionaries.  They were also playing politics in 1985, not 2012.

So how does this apply to the current situation?  That’s easy.  Build another warehouse and thumb your nose right back at the family who blew up your deal.

We can call this new building a concert venue or an opera house.  Call it whatever you want; just don’t call it an arena, pavilion or stadium.

That’s how it has to be done, because Seattle is figuring out how they can build a new state of the art arena right now. To bring the Sonics back to Seattle, they are lurking in the shadows, ready to pounce on the next available team.  Sacramento is in an arms race and they need to get back to fortifying their position, not standing in the open defenseless, waiting for the inevitable attack.

Are there issues involved here?  Sure.  AEG has already stated that they are not interested in building another Sprint Center that has no anchor tenant.  They were ready to kick in nearly $60 million to help fund the previous ESC deal.

AEG has also said that they will jump back on board if an anchor tenant is found.  So in reality, the city needs to find that extra $74 million the NBA was going to chip in.

Look for the money under a rock or better yet, look for it under thousands of rocks.  I know it doesn’t sound easy, but find the investors that you need to get the shovels in the ground.

While Seattle is busy building a new home for a professional hockey or basketball team, the city of Sacramento is falling behind.  Way behind.  And when a decision has to made by the NBA Board of Governors on the fate of the Sacramento Kings, you can’t just point your finger across the room and say, “We had a deal and they backed out.”

When the NBA comes calling, you tell them that while it is not “capable of being the home venue of a major league sports franchise” today, with a few adjustments here and there, it would make it a perfectly suitable, state of the art basketball facility.

What if the Maloof family decides to keep the team in a run-down Power Balance Pavilion for the next decade?  Then so be it.  Put them out of business with a thriving concert hall that attracts major acts.  Turns the screws until they bleed or do the reasonable thing, join the party.  In the meantime, pay back your investors with the profits.

That’s what the 1985 Sacramento Kings owners did.  They took the decision out of the politicians’ hands.  It is time for politicians to return the favor. 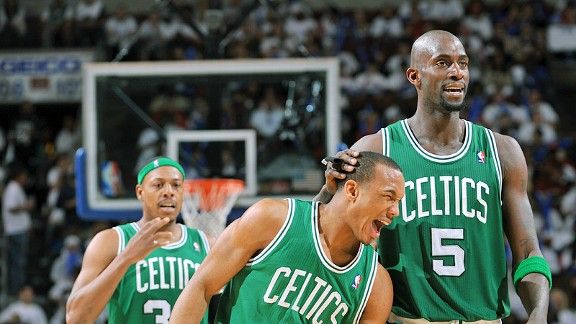 Your Morning Dump... Where Avery Bradley doesn't know anything about his rehab time frame