One Month Til Cougar Football Hello Cougar fans, hopefully your batteries are charged after a nice weekend and none of you have a case of the Mondays.

Lots of news and notes to get to after the jump, but before we get there, I wanted to let each of you know the 2012 Yahoo Pick Em League has officially been setup. Each Thursday as we preview the upcoming weekend’s conference slate here on the blog, each of you will be able to take us to task with your own picks. At the end of the year, we will see how we all stack up!

Click here to sign-up. Search for Group 1191 and use “gocougs” as the password. The group has filled up rather quickly the past couple of years, so I will definitely create a second group when this one is full.

More after the jump!

So after a long weekend up on Camano to celebrate a friend’s birthday, I find myself in the all too familiar territory of cramming all the last four or five days of Wazzu news into one sitting. Some of the stories below may be a bit rehashed, but I find them awesome nonetheless!

First of all, before I absolutely lose my freaking mind, look at what Vegas and the Offshore Books are offering the Cougs. BYU has opened as a 12.5 favorite against us. While we haven’t had the on-field results the last 10 years that we would like, there is no way, BYU is more than 2 touchdowns better than us. I know JasonUW will be down in Vegas here soon and would probably be happy to lay some action for you. And while I am on the gambling kick, I ventured over to Sportsbook to checkout their Pac 12 Champion odds. WSU comes in at +6000, which means a $10 bet would pay you $600 if they won the league. Meanwhile, USC is the favorite at -175 ($10 pays $5.71), and OSU, ASU and Colorado all have worse odds than us, so I guess that means they’re picking us to finish 9th. The good news there is that UW, UCLA and Arizona are each +5000, so we aren’t too far from 6th in their mind! I’m also glad to see nobody is smoking the crackpipe offshore! If the three media members who picked ASU to win the South Division would please stand up, your credibility needs to be called to the floor! Hell, even Ted Miller thinks those were idiotic picks.

I briefly caught it via Tony Thompson on Facebook as I headed north the other day, but how awesome/cool/amazing/inspiring/badass is it that the New Orleans Saints have erected a statue outside of The Superdome of Steve Gleason’s block in the 2006 opener?

Surprisingly, no complaints so far from the camp of New Orleans native, Lil Wayne. Could there have been a classier quoter from Gleason at the unveiling?

Mike Leach and staff released updated weights on the most current roster, as well as a depth chart. While nothing groundbreaking came from the updated weights and the article is premium, I am happy to report, fans will notice a slimmed down Andrew Furney this fall. 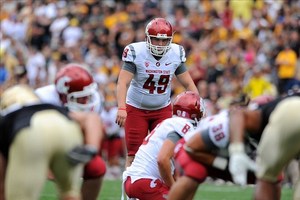 Taking a further look at the depth chart, there are definitely some interesting highlights. The first one to catch my eye is that Lake Stevens grad and walk-on RS Sophomore to-be, Gunnar Eklund, is listed as the back-up at both Tackle positions. It was more than a year ago that I highlighted an alarming lack of depth along the OL beginning in the 2012 season, when I said:

Let’s say for hypothetical’s sake, you were kidnapped and the ransom to your family was your death if the the 2012 WSU Football team failed to produce a 1,000 yard RB.  How confident would you feel in your chances of living, behind an OL of Fullington, Forbes, Hodgdon, Goetz, Pencer, Rogers, and Reitnouer?  While they could all potentially develop into a nice group, what if Wendall Taiese and Alex Mitchell never see Pullman?  What if Pencer, Hodgdon, and a handful of walk-ons decide to hang up their cleats?  Not much depth there. So having a walk-on listed as the back-up at both Tackle spots doesn’t come as a total shock to me, given there has been attrition the last couple years with underclassmen not staying healthy (Rietnouer, Sebass, and a couple others whose names escape me but went to Colfax and Skyline high schools respectively) or leaving school to pursue boxing careers (Prescott) or the CFL (Pencer).

That being said, before you totally freak out at this, consider that four of the six OL in the 2012 class aren’t even on the roster yet. Denzel Dotson enrolled in January and BJ Salmonson is scheduled to arrive in January 2013.

Another interesting note according to the latest depth chart, is that former walk-on (or is he still a walk-on now that Wulff is gone?) Bennett Bontempts sits ahead of Gino Simone and Blair Bomber at the H WR position.

Additionally, with the departure of starting Nose Tackle, Anthony Laurenzi, last Thursday, based on the depth chart, we will see Steven Hoffart starting in his place. Scary stuff considering our entire scheme is predicated upon the DL eating up opposing OL so that our LBs can make plays. We are just mighty thin and very inexperienced on this side of the ball. I think we’re in for some high scoring contests this year!

I’m sure many of you know last Wednesday was Pac 12 Media Day. If you haven’t seen the Cougs at the podium, do yourself a favor and watch this video! Some great stuff there, and what stuck out to me?

Kudos to whomever is driving around the Tri Cities with this beautiful new WSU License Plate! Thanks to the poster over on Cougfan for sharing too. Lastly, it was nice to see Coach Leach reel in his 12th verbal commitment over the weekend. Recording setting RB, Olitto Thompson, who Scout lists as the #66 RB prospect in the land, chose WSU over offers from Utah and Arizona. Checking in at 5’10” and 210 pounds, he will be the biggest scholarship RB on our roster if he winds up in Pullman. Thompson ran for nearly 3,500 yards last season at Concord HS in northern California.

To borrow the immortal words of the Comic Buy Guy from The Simpsons: Worst. Welcome Wagon. Ever. Here are the Angels trying to show off...