Breaking down DeMarcus Cousins’ efficient outing against the Toronto Raptors

Looking at the Sacramento Kings' shot selection in yesterday's win over Toronto.

In the Sacramento Kings’ 107-100 victory over the Toronto Raptors last night, DeMarcus Cousins played perhaps his best game of the season.  He recorded his fifth double-double, scoring 25 points on 11-of-18 shooting and grabbed a game-high 13 rebounds.

He played a composed game within the flow of the Kings’ scheme.  Compared to some of his more recent outings, Cousins forced very little on offense.  Below is a breakdown of all 18 of his scoring attempts last night against the Raptors, followed by a look at his shot chart from NBA.com.

Cousins posts up Jonas Valanciunas on the left block.  He has good position over the rookie, however DeMar Derozan swoops in for the block as Cousins turns around for the shot.  It’s a missed attempt, but a good one to start the game.

Aaron Brooks created this opportunity for Cousins with his driving ability.  Cousins could’ve stayed stationary at the left elbow while Brooks broke down the Raptors’ defense.  Instead, the Kings center keeps moving toward the basket and his point guard finds him for the easy flush

Once again, good activity by Cousins playing without the ball.  Off the drive, John Salmons draws the Raptors defense toward him and finds Cousins cutting to the rim.

After setting a pick for Tyreke Evans on the left elbow, Cousins gets the ball back within a few feet from the box.  He turns around to face up his defender and uses his footwork and handles to blow past him, finishing with a nifty reverse layup at the basket.  Typically, Cousins has the tendency to set up his drive on the elbows – further away from the hoop.  But the space between him and the basket on this shot attempt minimized the distance he had to travel, making this particular dribble-drive attempt a good one.

Cousins receives the ball on the right elbow, attempts to break his defender down off the dribble and misses the shot.  This attempt was the exact kind of poor shot I had just previously described.  It’s the kind of shot the Kings need Cousins to take less frequently, which he did last night.

The Kings center gets the ball on the high post and turns around for a jumper from the right elbow.  Just as I said about his fifth shot, he should be taking fewer of these attempts.  Cousins can take them on occasion to keep the defense honest and open up driving lanes for his teammates.  But the fewer of these shots he attempts, the better off his shooting percentage will be.

A blue-collar shot attempt.  Cousins posts up Amir Johnson on the left box and simply backs him down using his strength for an easy right-handed layup.

This play actually starts on the defensive end, where Cousins does a good job of chasing and closing out the 3-point shooter on the left corner.  The Kings big man keeps his motor rolling by running down the court on the break after the his team secures the rebound.  Marcus Thornton rewards Cousins for his complete effort by finding his center for an easy dunk in transition.

A throw-away shot.  With little time left at the end of the first quarter, Cousins heaves up a 3-point attempt before the clock expires.

Cousins works the pick-and-roll with Salmons, which sets up the Kings big man in good position in the paint.  After receiving the ball in motion from his small forward, Cousins takes one dribble, spins, freezes Valanciunas after two head fakes then takes the easy layup for two.

Cousins posts up on the left block and just misses the jump hook attempt.  Valanciunas does do a nice job defensively to keep the Kings big man from pushing his way closer to the basket on the shot.

Cousins gets this opportunity by staying close to the basket during the entire offensive possession.  After Evans misses the layup on the drive, Jason Thompson follows with the offensive rebound and tip.  After Thompson misses, Cousins is there to clean up and finish the play for a score.

Cousins bullies his way on the right block for good post position against Amir Johnson.  He turns around for a jump hook, but misses.

Salmons and Cousins run a pick-and-roll from the left wing.  The set is run fluidly and gets Cousins a good moving shot attempt at the rim.  The Raptors help-side defense recovers and Derozan just blocks the shot.

For the fifth and final time Wednesday evening, Cousins posts up, setting up on the left box against Amir Johnson.  This attempt is just another good instance of Cousins recognizing his strength advantage over the Raptors big man.  The Kings center turns around for the short jumper while drawing contact and the foul.

The Raptors defense plays Cousins well on this possession.  He receives the pass at the free throw line and just has nowhere to go off the dribble.  He manages to power his way a couple steps into the paint and offers up a couple pump fakes before attempting a turnaround circus shot that goes in.  A combination of skill and luck get Cousins his 23rd points of the game.

Cousins’ 17th shot winds up being just his third dribble-drive attempt for the game.  He receives the ball at the top of the 3-point arc and catches the Raptors’ defense sleeping.  No one in black and red comes to pack the paint, leaving Johnson to backpedal while Cousins beats him to the rim for a layup.

His last attempt of the night comes off yet another pick-and-roll set with Salmons.  Same spot on the floor as the previous PnR, Cousins receives the pass from Salmons off the screen on the right box.  In good position, the 22-year-old center gets a good look, but just misses the shot. 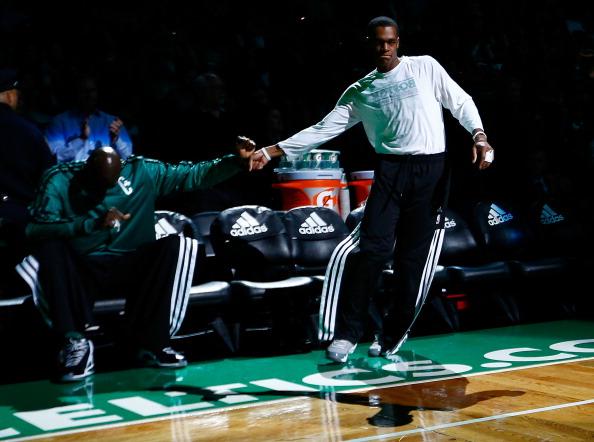 The C’s beat the TWolves at the Garden last night 104-94. Celts are off today before travelling to Philly for the 1st game of a...