Decided to open with the picture of Eli just overthrowing Cruz in the first quarter, a missed opportunity for the Giants. This game was full of missed chances for the Giants, who played well at times but beat themselves offensively with a handful of penalties and a few explosive plays that the Giants left on the table. Defensively, let’s just hope we don’t face Griffin again this season.

With a visit from Drew Brees and the hated Saints looming, the Giants offense needs to play sound penalty-free football and capitalize on opportunities for explosive plays (which of course are set up by the :small ball” plays we constantly harp on on here). We know that the Saints can and usually do just that as well as anyone around, so it is on the offense to keep up in the expected high scoring affair, one with an over/under of 53 in most books that you can bet on the NFL. Coming off of a 5-int game, Brees will certainly be prepared and crisp in the passing game so it is on the front four to not allow him to get comfortable. With that, a look at some grades from Week 13.

…although both Snee (+2) and Boothe (+4) graded out fairly well the offensive line as a whole turned in an uninspiring performance and one of their most inconsistent of the year. Most of the two’s solid grades came on plays where they pulled to be the lead blocker on a run, other than that, they too struggled like the rest. As a whole the group recorded 22 negative plays and their overall combined score came in at a very unimpressive -3. Really not much to say about this one other than that. Much like the overall result for the Giants in this one, there was a lot of good, a bit more bad and some pretty average play in between. And along those lines—the group recorded a -8 collectively in the 2nd half. Not good.

…even though he came in at a +2 and had some moments, Chris Snee is either still hurt pretty badly (not unlike many guys at this time of year) or has lost the leg drive that has made him a great OG both in past seasons and earlier in this one. My guess is that he still has a pretty significant hip injury which is something that would explain the lack of drive coming from Snee in the run game. He is also a bit slow to get off the ball, something you don’t hear often about Snee.

…Locklear recorded a +1 on his last play of the season, which was fitting becasue he certainly was a + for the Giants offensive line in his time this season. He was a very solid pass protector and was just effective enough in run blocking. It is also fitting that his last play of the season came with him pass setting on a draw play, something I have often complemented him for this year. For the game he came in at -1. This injury is a killer not just because the loss of Locklear (seriously—Diehl isn’t as bad as you think) but it also means that little-used OT James Brewer now slides into the extra-OL role with the first team offense.

…the wide receivers had a generally good game this week grading out to a total of +11. While it wasn’t the +17 of last week it was still a pretty solid performance. Cruz and Nicks both were open deep on routes early in the game that Eli simply missed them on (plays 16 and 13, respectively). Cruz’s best two plays came on play 31 and 56. On those two catches he totaled 79 of his 103 yards on the night. The first play, which went for 30 yards, was probably the most impressive route as he used a double move to perfection to gain space down the field. Cruz was far from perfect though. He had a bad drop in the red zone on third down late in the third quarter. It looked like he heard footsteps over the middle and the Giants had to settle for three there.

…Nicks had a solid game overall bringing in five grabs for 43 yards. His longest catch went for 16 on the patented Nicks-slant/post/dig down the middle of the field. He did a nice job coming back to the ball as usual and his hands were great as we have come to expect. Nicks was lacking that one big play that would have made this a great game instead of just a good one. Had Eli connected with him on play 13 it could have been a much more impressive stat line for Nicks.

...Bennett had his best day in the passing game in quite some time. He broke a few tackles to gain extra yards and his routes were a lot sharper than usual. He caught his first touchdown pass since Week 3, which was especially nice because it was in the red zone (something that we here at Ultimate NYG love to see) but his best play of the day came on the final play of the first half. Bennett used a great head fake to make his defender bite and he found himself wide open to catch a pass from Eli for 28 yards to set up a field goal just before half time. However—-

…as nice as it was to see Bennett perform well in the passing game it was frustrating to watch him in run blocking situations, where he graded out to a -2. AND If it wasn’t for two outstanding blocks it could have been a pretty ugly number for the Black Unicorn in that category. Bennett has the talent and most of us knew that he would be a project if he was to become the “tight end of the future” but as of now he is clearly just that: a project. However, his great offensive production is covering for his inconsistent–at times lazy–play in run blocking. With some time and proper coaching I fully expect Bennett to become a top tier tight end in this league. He has shown that he can be a top-flight run blocker but needs to do so on a much more consistent basis.

…Manning played well in a losing effort—cutting down on his mistakes, guilty of no turnovers, and making some fine completions. He cannot be held responsible for penalties—except, of course, for the two he managed to perpetrate himself: one delay of game (hard to forgive) and one intentional grounding.

….there certainly were some highlights— particularly the perfect timing pass to Nicks in the first ( 2:03),
the throw to Bennett in the third (.12), and the pass to Cruz in the 3 rd (5:37), among others. And there
were some catchable balls that weren’t caught.
...only partially countering these highlights were some pretty ugly plays. In the first (3:14) Cruz has
the defense beat and is open for a possible TD, but Eli overthrows him. Then in the second with 4:53
remaining, Manning heaves a pass to—or rather in the direction of—Cruz, and in doing he not only risks
interception, but hangs poor Cruz out to get blasted. A penalty nullifies the play, and thus it is erased–
but not forgotten.
…all in all Eli was fine. It’s not his job to stop the other team’s running game, and he can’t do much about
linemen who jump. His grade came out to a steady 0. His stats mirror that rating. He was 20 for 33 (61%) for 280 yards and one TD. 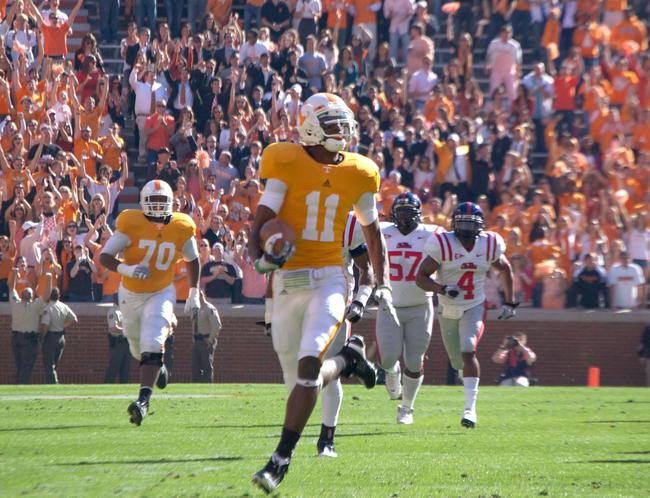 Butch Jones finally made up his mind about a coaching job and Tennessee finally ended it's long coaching search as BJ will move to Knoxville...