A ‘Target Center’ review… and the return of Ricky?!? 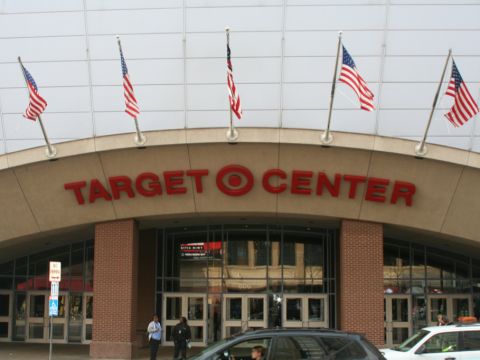 If you haven’t seen it before, the website StadiumJourney.com publishes reviews of sports stadiums from all over the world.  To date, they have posted reviews of over 1,200 different stadiums. It’s actually pretty cool if you ever go check out the site.  And SJ also recently posted a new review of the “experience” at Target Center. I can’t say the “experience” will knock your socks off, but admittedly it is much, much better than things were before the renovations of a few years ago.  Man, Target Center was just brutal before back then.  So, I guess things have improved in that regard!

Please click “Read More” to check out the TC review, and thoughts on the impending return of Ricky!

Most importantly, the word on the street is that Ricky could return as soon as Wednesday! Wow, wouldn’t that be something?!?  I know it would make me pretty happy in the pants to see him galloping around out there again. It’s been far too long. And as the AWAW article suggests, I think Ricky and SHVED would make some pretty sweet music together out there on the court. I am drooling in anticipation. There is no line yet for the game, but I have to think his return would greatly favor the Wolves, despite the fact that he hasn’t played in so long and will most certainly be on a lower-ish minute count for a while yet.  Another factor in our favor is that Denver is simply NOT a good road team at all this year, so all in all, I like our chances a lot.

Who the heck knows what is happening with Denver this year, because a lot of pundits picked them to advance far into the western conference playoffs.  I think I’d bet on the Wolves Wednesday night though, as we should be able to handle business at home with a lot of rest.  But if NBA betting isn’t your thing, definitely make sure to check out SportsBetting.ag for all your college football bowl betting needs. As you know, it’s bowl season and there are an insane amount of bowl games about to go down. And NCAA Football bowl season might be about the only thing potentially as exciting as the impending return of our savior Ricky. I’m stoked for Wednesday night!  But if he doesn’t return against the Nuggets, he almost will assuredly return Saturday night against Dallas. The time is near. REJOICE.

Alas, I digress.  Back to the Target Center review. It’s insightful, and pretty well done. Especially for someone that may not have made the trek to Target Center before.  They give “Food and Beverage” a 3 stars, which is probably fair.  However, the mention it being pricey, which it really isn’t compared to almost every other stadium/arena I’ve been in.  And the drink prices are reasonable as well.  The problem is more that it’s overall bland stuff (unless you get the VIP-ish food and whatnot, but that’s not something the common fan can afford.)  I’ve seen much worse-price wise, but I’ve also had much better food at other places.

“Atmosphere” gets a 4?  Ehhh, I guess.  Things have been much better the past few seasons, but man the place used to be DEAD. They do a lot of family stuff and crap like the t-shirt tosses which I absolutely abhor, but to each their own I suppose. Big props to mascots “Crunch” and “Air Crunch” though, they are the MVP’s of the entertainment. Especially Air Crunch.

“Neighborhood” gets 5 stars out of 5.  Probably fair, as downtown Minneapolis is solid.  It’s also pretty clean and largely devoid of begging homeless folk, but there are some, like any other major city.

If this review had been written 3 years ago “Fans” would certainly have NOT gotten 3 stars. But things have been better lately. No thanks to Kahn though.

And there are a bunch of other factors that the author ranks and analyzes as well.  Check out the article for the rest of it, and if you are interested, check out the rest of the site as well. Pretty cool reading reviews for some stadiums and arenas that most of us will probably never seen in person during our lifetimes.

StadiumJourney.com, publishes reviews of sports stadiums from all over the world.  To date, we have posted reviews of over 1,200 different stadiums. We recently posted a new review of the experience at The Target Center

Over the weekend, the Los Angeles Dodgers broke the proverbial bank when they added free agent pitchers Zack Greinke and Hyun-Jin Ryu to their already...