The Kings struggle on their way back to respectability.

The Sacramento Kings are off to an atrocious start to the 2013-14 season.  While plenty of games have been entertaining, that doesn’t excuse the fact that the Kings are just 5-13 on the season and that’s after Saturday night’s 112-102 overtime victory over the Utah Jazz, who have the worst record in the Western Conference.

So what gives?  Why do the Kings get close, but lose time and time again?

There is no way to sugarcoat it – the Kings just aren’t that good.  They lack talent, cohesiveness and a killer edge.  They are young and inexperienced, and their veterans are all playing well below their career numbers.  Their coaching staff is new and trying to break a long-standing culture of losing. They’ve also played the most difficult schedule in the NBA so far this season.

We have heard it time and time again from everyone from owner Vivek Ranadivé to coach Michael Malone: this season isn’t about wins and losses; it’s about rebooting a franchise and putting it back on the right path.

But is there a limit to what Kings fans should have to endure?

I’m not sure that there is.  This is the NBA. The Sacramento Kings were left for dead a few years ago, and it will take a few more years to complete the rebuild.  After the Anaheim debacle and the Seattle fiasco, Kings fans have been through more than any fanbase should have to live through, but it’s not over yet.

Fans are just going to have to be patient.  They are going to have hope that 20-year-old Ben McLemore and 22-year-old Derrick Williams develop as players.  They need to pray for good luck in the NBA Draft lottery and keep their collective fingers crossed that DeMarcus Cousins is an All-Star.

Having a “favorite player” during this transition is a mistake.  Players will come and go as general manager Pete D’Alessandro bends the roster to fit his personality, so don’t get too attached.  Coach Malone will keep mixing and matching pieces in an epic search for combinations that work on the floor.  Both men will be given multiple years to prove themselves.

Combating a culture of losing with more losses sounds strange, but it is the way that the world of professional sports work.  Very few times does a team magically make a leap in the standings when its house is in complete disarray.  And yes, the Kings are still in disarray.

They hired a new coach and general manager days before the NBA Draft.  They’ve brought in a new team president, new team executives and over 30 new owners of different shapes and size in a little over six months’ time.  And the changes aren’t over.

As the team ramps up for a new arena, even more moves will be made.  While an NBA team is supposed to be about basketball, we are still not there yet in Sacramento.

We aren’t making excuses for the Kings’ franchise; this is simply the reality of the situation.  The team is going to lose more than it wins this season and most likely next season as well and maybe even the year after that.

Cousins and McLemore are the only two players that are guaranteed to be on the roster moving forward and even that could change if a miracle deal walked through the door.  Isaiah Thomas might’ve price himself out of the Kings’ budget and end up walking this summer.  The departure of Jimmer Fredette is almost a certainty, which could be said about 10 or 11 other Kings, as well.  Nothing is certain for a 50-60 loss team.

But there is a bright side.  This is not your typical ownership group and D’Alessandro isn’t your typical general manager.  Sacramento is going to be aggressive every step of the way trying to speed up the process of putting Humpty Dumpty back together again.  There may be some swing and misses along the way.  There may have even been a couple already that we just don’t have the luxury of hindsight on yet.

Like it or not, it might get worse in Sacramento before it gets better. Growing pains are expected and so are heartbreaking losses, trades, flops and failures.  While you struggle to watch missed open jumpers and blown defensive assignments, just keep in mind that this is what Kings fans asked for.  You wanted this team and all of its warts.  But always keep in mind that it could be worse.  You could have no team to cheer for at all. 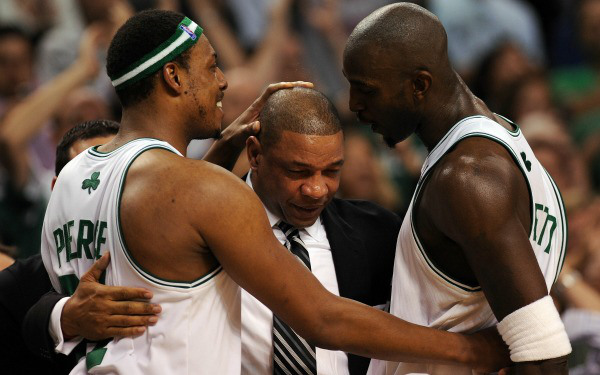 Your Morning Dump... Where it's reunion week and Doc Rivers has a lot to say