Officiating in the NFL: Breaking Down How League Can Fix Its Biggest Problem

Officiating in the NFL: Breaking Down How League Can Fix Its Biggest Problem 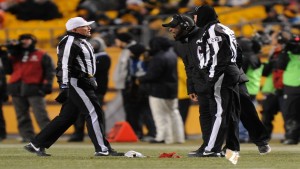 The story in the National Football League this year has become a tale of blown calls, inexplicable gaffes, and other big messes made by referees, everyone is looking for answers. But are they looking in the right places?

If there was a movie to be made about the 2013 NFL season, one of the subplots would be the officials. The bad guys in stripes would be the antagonists. The players and coaches of the league would be the innocent victims. The fans would be the shocked and innocent bystanders.

Never before have officials in any sport been so scrutinized. Every game seems to have its own story about officiating gaffes. It’s becoming easier and easier to think that these guys, the arbiters of on-field justice, can get nothing right.

But is this season really an outlier?

Ben Austro, owner of the Football Zebras website, doesn’t think so. He says that while this “hasn’t been a good year for the officials…the degree of the ‘problem’ has been overstated.'”

“What was once a game of inches is now a game of frames,” says Austro. “A tight call on a sideline now is subject to multiple angles of review. The level of scrutiny has just explosively increased as technology has improved.”

The attention from the media as well as the ire of fans, coaches, and players focuses on blame for the problem.

With solutions seemingly missing in the league, perhaps everyone is looking in the wrong places. It’s easy to blame the guys on the field. They are the visible arm of the league’s officiating branch.

Given the mess that arose when replacement officials were used early in the 2012 season, perhaps officials aren’t experienced enough to do the job under this degree of scrutiny. Dean Blandino, the league’s new Vice President of Officiating, may be a rookie, but his staff of officials are not. Austro pegs an over-three-year increase in seniority among officials since the year 2000 when “the average official had 8.6 years of seniority. Today, that number is 11.8 years.”

Two of the more well-known referees, Ed Hochuli and Jeff Triplette, have been in the league for almost two decades. Hochuli has been in his current position for 21 years and Triplette for 15.

According to Football Zebras, of the league’s 119 active officials, 53 were hired before the year 2000. Only eight have been hired since 2009. Dean Blandino has only hired one so far.

“While age isn’t the only factor, some officials seem to be staying in the game too long,” says Austro.

The reality is that the problems, for the most part, do not originate on the field with the guys in the stripes. Austro agrees. “These controversies haven’t just sprung up since the officials signed their latest contract. It comes down to the fact that their accuracy is still averaging around 97, 98 percent.”

Austro’s “game of frames” is partly to blame for all of the attention. “The level of scrutiny has just explosively increased as technology has improved.” While it may be easier now than ever before for fans and coaches to find multiple angles viewable at slow speeds, the men responsible for making the calls don’t have the benefit of using the same digital hindsight before they make decisions on the field.

With seven officials keeping an eye on 22 players on any given play, things are going to escape their notice. Six umpires can’t see everything 10 baseball players are doing in a playoff game, either. Football referees have longer odds.

The league has gotten in on the blame game by announcing downgrades of officials for missed calls and being more transparent about mistakes that are made during games. Austro explains that “the official word from the league office can now be placed in a headline next to ‘refs screwed up’,” going on to say that “increased attention to what the league admits are downgrades (missed calls) gives the impression that mistakes have increased exponentially.” This is a near-complete reversal from the pre-Blandino system where officials were protected behind the shield.

When the league goes back and retroactively fines a player or coach for something that wasn’t flagged, it also makes that crew look bad.

Sometimes the criticism is justified. Triplette’s crew messing up a down in a game between Washington and the New York Giants was inexcusable. Ed Hochuli’s crew allowing Cincinnati’s Kevin Huber to be obliterated by Pittsburgh linebacker Terrance Garvin—a play which ended Huber’s season due to a broken jaw from the helmet-to-face hit—is also problematic because it happened right in the middle of the play’s action.

But a crew that misses a call for pass interference, even at a critical time, can only bear so much blame. They didn’t get to watch things unfold in slow motion and from ten angles. They don’t get to consult video before making a call. They just have each other.

Centralizing replay has been one of the more reasonable suggestions. Austro says it has been considered by the Competition Committee multiple times and me be brought up again this offseason. While this sounds like a great idea on paper—and one already employed with great success in the NHL—Austro doesn’t see it as being the answer.

“In the end, I don’t see a drastic shift in the replay system making any kind of meaningful contribution to the game over the current system. It’s not to say that the current system isn’t flawed, but a centralized replay in the NFL isn’t, in my opinion, the silver bullet some claim it is.”

Belichick thinks that everything should be reviewable via the challenge system. “When you have two challenges, I don’t see anything wrong with the concept of ‘you can challenge any two plays that you want,’” he said in an interview at the beginning of December.

It’s hard to argue with that logic. No coach is likely to throw their precious challenge flags when the play doesn’t really matter in the outcome of the game. Challenges are limited to two per game (three if you get the first two right) and are tied directly to timeouts. No coach is going to risk his timeouts over something trivial.

You can count former Supervisor of Officials Jim Daopoulos as a supporter of the Belichick solution. He was quoted as saying “We have a tool that allows us to correct errors that are correctable.  Coaches should be given that opportunity.”

This solution does fix some of the problems. Belichick’s team lost a game to the Carolina Panthers and later won one against the Cleveland Browns that were each determined by questionable pass interference situations. If presented with the opportunity to challenge those plays, things could have turned out differently.

Penalties have become increasingly stiff. Austro says judgement calls must be made correctly on penalties protecting player safety, and “enforcement errors” must be mitigated. “I think the league is going to have to try out some system of correcting some of these miscalls.”

Another step would be to make that “game of frames” work in favor of the officials by giving them more latitude for using replay to get a call right. “I want to make sure we get the fouls everyone sees,” said referee Gene Steratore in a rare interview. Going under the hood to look at something again would allow that to happen more often.

In the end, this is a new era with Dean Blandino at the helm. “Will there be benchings for failing rules tests? Will there be stricter physical conditioning standards? Will some officials be asked to retire?” asks Austro.

“Once [Blandino] has a full year in the position, I think we will get a better idea on how he intends to improve the officiating overall,” Austro predicts.

Since NFL rookies have growing pains, maybe that’s what we’re experiencing from Blandino’s crew. But the clock is ticking, and changes need to be made.

Football Zebras‘ owner/editor-in-chief Ben Austro contributed to this article. Check out his site for weekly referee assignments, news and analysis!