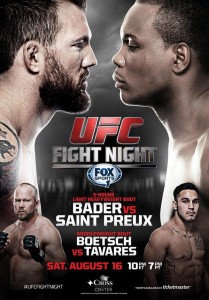 Hopefully this long hiatus away from MMA finds all you fans rested and ready to resume to action. With 63 fights scheduled for the next month, and possibly more announcements to follow, fans will certainly make up for lost time. And it will be a lot of time with events coming as early as 1:00 am Eastern in some cases. Luckily, you won’t have to get up too early Saturday to see this week’s star.

Some fighters smile when they get hit, which is usually a good indicator that he/she got tagged. “Smilin” Sam Alvey lacks such a tell because the smile is never off of his face. Perhaps one of the toughest guys in the business to break, he not only always looks like he’s happy to be there, but also always seems to be in the fight. This is far more than a facade though. Sporting some amazing knockout power, he could pull a win out at any time. He proved this in his MFC title fight against Jason South last October. Heading into the 5th round, many had the scorecards even. With four seconds left on the clock, Alvey hit a big counter right hand and took home the title. Pair that with the right he hit only 47 seconds into his Ultimate Fighter preliminary fight and it’s clear he can land the big shot at any time.

The 16th season of The Ultimate Fighter was void of its usual coach bickering. In addition, having followed the less than stellar Ultimate Fighter: Live, the ratings of the show were also not amazing. It’s premiere is still ranked amongst the lowest in the series. This would explain why most of the MMA world did not get a chance to see Alvey’s stellar KO. An early exit on the show due to a questionable majority decision kept him from getting as shot at the finale, further keeping him out of the public eye.

Tom “Kong” Watson has shown he has plenty good hands and a great chin to match. However, his last couple of fights he’s had a tough time outstriking fighters who are primarily grapplers. When he steps into the ring with Alvey, this won’t be the case. He’ll have to stand toe-to-toe with someone who wants to bang with him. With neither fighter having ever been knocked out, this just could be the night for it. Either way, you aren’t going to want to miss this one.