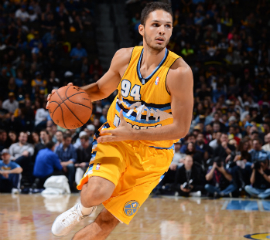 If you place $5.00 on Penn State winning the Big Te in 2015 and the Nittany Lions bring it home, you could be in for a decent return just in time for the holiday season.

New conference championship odds were recently released by one online sportsbook. As you should have expected, Ohio State is the easy favorite in the Big Ten after winning the conference and national championship last season and returning a ton of talent in 2015. The Buckeyes were listed as -150 favorites in the Big Ten in 2015. For those unfamiliar with the numbers, that means you would have to bet $150 in order to win $100 if Ohio State wins the Big Ten.

Penn State is listed at +1700, which means a $1 bet could turn into $1,700 in winnings if Penn State wins the Big Ten. That’s worth putting a couple bucks down, right? I know I would seriously consider putting down $10 and seeing what happens. Ohio State would still be my favorite this season, but at those odds it would not be a bad bet to make if yu are looking for a solid return n the end. Hey, you have to bet some to win big, right?

Outside of the Big Ten, I think USC in the Pac-12 (+450), Oklahoma in the Big 12 (+500), and LSU in the SEC (+1000) are all worthy of some strong consideration. LSU always seems to be in the mix in the competitive SEC West, although Alabama and Auburn each are likely to finish ahead of the Tigers. Still, at +1000 you might want to put a few bucks on Les Miles for the heck of it.

So, if you are into placing bets online on football odds, you may think about placing a few bucks on the Nittany Lions for a decent return. For those outside the United States, you may be more interesting in playing some online casino games at Royal Vegas in order to fund your football betting urges.

Here is a look at the betting odds for the Big Ten;

As you can see, Michigan and Nebraska would also net a nice return on your wager if you felt comfortable riding with the Wolverines or Cornhuskers. Between Nebraska, Michigan and Penn State, all three programs should be considered sleeping giants in the conference. It will only be a matter of time before Penn State and Michigan are giving Ohio State a run and perhaps knocking Michigan State down a peg. Over in the Big Ten West, Nebraska should be considered a perennial contender in the division, but there is work to be done to get by the top programs in the conference right now.

South Carolina took two of three games from the College of Charleston on Friday and Saturday to win the first series of the season. USC...