The former Kings big man stops by for a visit.

On the Sacramento Kings’ last homestand, Scot Pollard, Doug Christie and Bobby Jackson were invited back by the franchise as part of the team’s legends series to commemorate 30-years in Sacramento.  None of the three are what outsiders would consider “legends of the game,” but they are to Kings fans.

Pollard had a cult following during his time in Sacramento.  He was the anti-hero of a finely oiled machine.  Known for his mutton chops, wild hairstyles and tough-nosed play, Pollard is as beloved as any King from the Rick Adelman era.  Despite his protest against it, the former Kansas Jayhawk is in fact a Kings legend.

Before taking his courtside seat, Cowbell Kingdom was able to sit down with the blue-collared Scot Pollard for an in-depth look back at his career in Sacramento.

CK: I’ve heard you on the radio and I heard you say it again today to Bobby Jackson, you are pretty self-deprecating about being called a legend. But in Sacramento, you are considered one of their legends by most of the fans.  How does that make you feel to have that support?

SP: It’s really cool, but it’s definitely something I’m not comfortable with being called a legend.  I was part of a machine and there were a lot more important parts than me.  I was lucky to be part of it.  I relished my role.  I knew my role and I excelled in my role.  I’m not trying to take away from my own accomplishments, I’m very proud of my career, I’m not embarrassed by it at any point, but I’m also not comfortable with the legend moniker.  That’s too much for a guy like me.

CK: We are watching two coaching legends tonight in Gregg Popovich and George Karl.  Both have made a career out of developing secondary players and creating players.  When the Kings picked you up, you were at a low point.  You were a first round pick by Detroit and things had kind of gone sideways.  Rick Adelman is another one of those coaches that had an ability to see something in a player and see how to fit him into his system.  Is that an accurate assessment of coach Adelman?

SP: Yeah, things were sideways. This was my third team in my second year.  I had been traded once and cut.  I was like, ‘Wow, I guess I’m not going to make it in the NBA.’  And then I get here and I thought, ‘Fresh start, I’m going to work out and do great,’ and I didn’t get an opportunity right away, everyone was healthy.  And then someone got hurt and then I got an opportunity and I proved what I had done, I proved my hard work – the things I had done my whole life to get to where I was.  I felt like I got an opportunity to show off what I can do.

Rick Adelman figured out a way to get me in the lineup and allow me to do what I do best.  And what I did best was run around and push people.  And they needed me to do that.  They weren’t a defensive-minded team, but I was that guy.  We didn’t have a lot of guys that would jump on the floor and set hard screens, so I was that guy, I was the enforcer that did all of those things.

CK: You bring up Vlade and you bring up Chris Webber, Vlade has his international game and Webber with not only his pro game, but Michigan as well.  Both of those guys, from the outside, look like they should have a shot at the Hall of Fame.  How much do you think that not winning a championship here in Sacramento hurt their chances?

SP: As far as getting into the Hall of Fame, there have been guys who have made it without winning a championship – I can think of (Charles) Barkley right off the top of my head.  It certainly helps if you have the rings to back it up.  Success is success.  Wilt Chamberlain won two and in my opinion and anybody who has any brains, he’s the best player to ever play the game and ever will play the game.  There will never ever be a player that dominates the game of basketball like Wilt Chamberlain and he only won two championships.  And Bill Russell, one of the all-time greats, he’s got more rings than fingers.  And in my opinion, he wasn’t nearly the player that Wilt was, but he’s got 11 rings, of course he’s a Hall of Famer.  That’s a winner and that’s what makes a Hall of Famer is being a winner.

Vlade and Chris both certainly have credentials to make a case, but it would be a lot easier if they had a ring.  I have a ring and I’m not going anywhere near the Hall of Fame (laughing).

CK: Which would you prefer?

SP: Well, I would love to be talented enough to be considered a Hall of Fame player, but I know that’s not realistic, so I’ll take my ring and go home.

CK: How much do you miss being around Sacramento and miss being in this community and what was your first reaction when you heard Shaq was going to be an owner of the Sacramento Kings?

It’s a great city and a great organization.  The fan support is second to none in the NBA.  There isn’t another fanbase like this one in the whole NBA and it’s proved to me everytime I come back.

And my first reaction when Shaq became and owner was, ‘Wow, it’s kind of poetic justice because he used to make fun of us and call us the queens and now he’s part owner.’  It just goes to show you that this is a business and it’s about entertainment and he is one of the all-time greats.  There’s nobody who dominated the game in our generation like Shaquille O’Neal.  I was lucky enough to be one of the guys that got to get beat on by him and be one of those guys that tried to slow him down.

It was an honor to play against him and he is one of the all-time great humans too.  I love how he is off the court.  One time he grabbed my mom and gave her a kiss after a game and that was really cool.  Not a lot guys have that character.  He was a guy my mom wanted to meet and he grabbed my mom and gave her a big hug and a kiss and that’s cool.  He’s good in my book forever because of that. 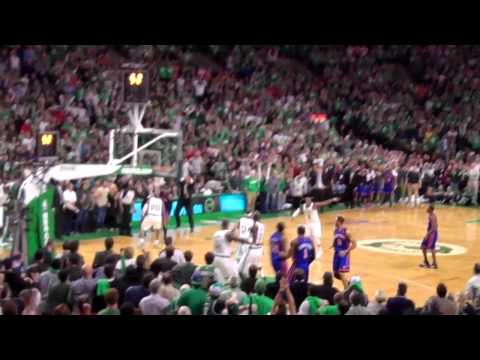