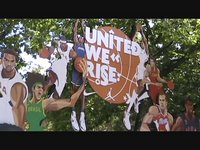 Riding high on a five-card win streak, Prelim Breakout Star delves into UFC 186 this weekend. While this card hasn’t garnered a lot of attention for the people fighting on it, it has been one rich with legal precedent. Hopefully that’s all settled now and we can focus on the fights. Here’s a fighter who has been lucky enough to stay out of the courtroom leading up to his fight.

At twenty-six years old, Aubin-Mercier doesn’t exactly have the most in-cage experience. He has only fought six times total and only two of them have been under the UFC banner. Still, the kid has top notch grappling chops. As a teenager, he was working to make the Canadian national judo team when he discovered MMA. His black belt in judo has been integrated seamlessly into an MMA game, which also includes a brown belt in jiu jitsu. This makes it tough to keep your feet against him and even tougher to stay in the game once you’re down.

As the runner up on a TUF Nations season, he was seen as an after thought to the show. However, what people have failed to recognize is the level of talent on that season. Along with the winner Chad Laprise, there were many notable fighters in his bracket. Amongst them was former Prelim Breakout Star, Jake Matthews. Jake has been on a tear as of late, but people seem to forget that Aubin-Mercier took him out in the first round of the show.

Aubin-Mercier seemed to have a bit of trouble with the aforementioned Chad Laprise due to his takedown defense. Leprise stuffed seven of The Quebec Kid’s nine takedowns. Takedown defense, though, is exactly what got David Michaud into trouble against Li Jingliang. Takedowns in two of three rounds left him on the wrong side of the judges’ scorecards. He’ll have to have much improved defense to keep Aubin-Mercier at bay as his takedowns are even better than Li’s. Not to mention, his finishing rate is significantly higher as well.

Paging Buffalo developers and restaurateurs. There is an Ohio-based grilled cheese chain that must expand to downtown Buffalo. Melt Bar and Grilled serves up all...