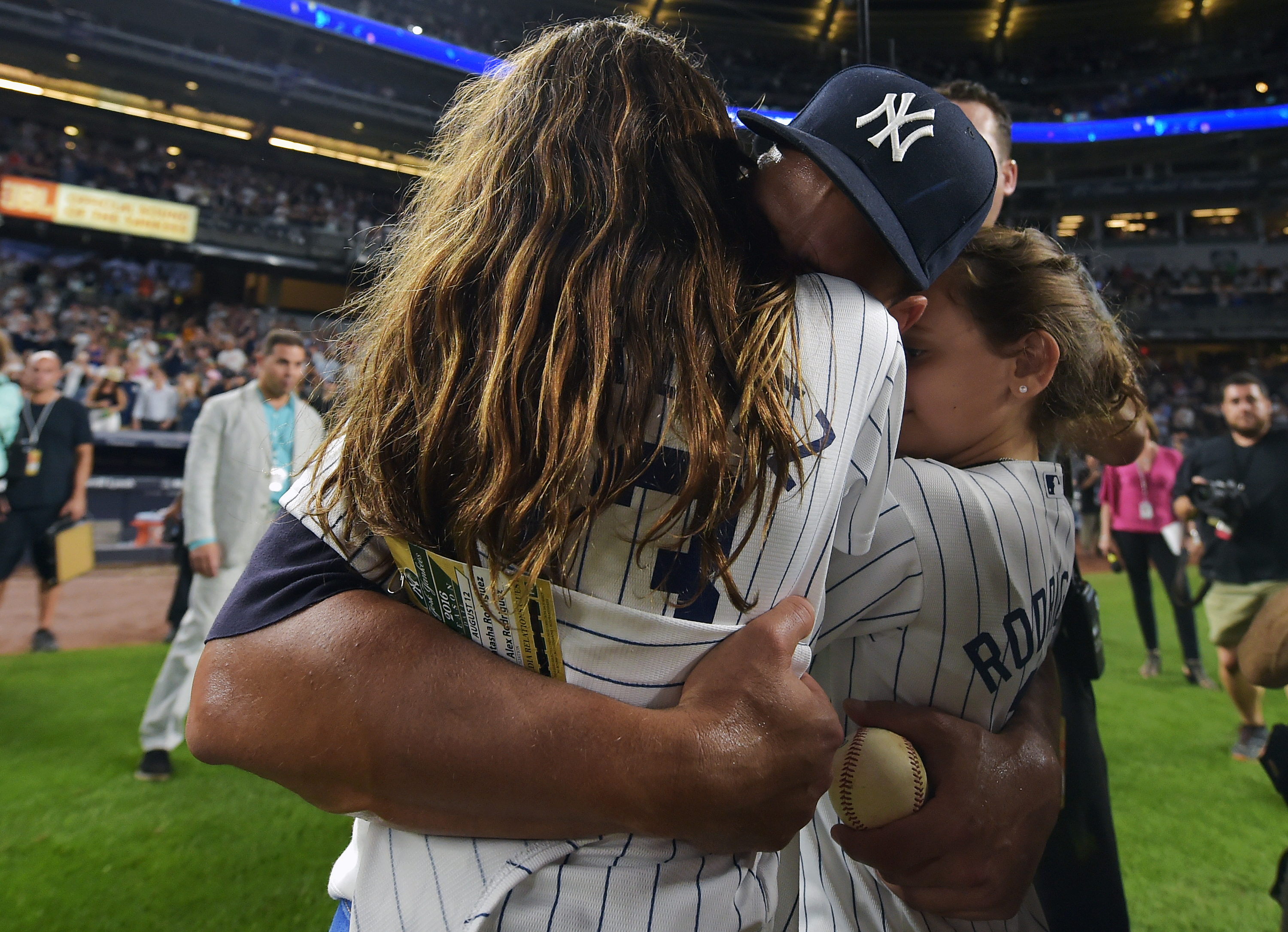 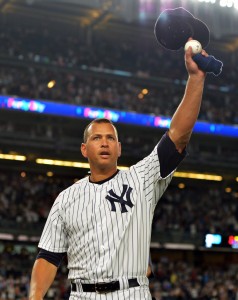 NEW YORK, NY – AUGUST 12: Alex Rodriguez #13 of the New York Yankees tips his hat to the crowd in the ninth inning against the Tampa Bay Rays at Yankee Stadium on August 12, 2016 in New York City. (Photo by Drew Hallowell/Getty Images)

Lots to absorb from the A-Rod Yankee farewell, so I wanted to take it all in before Squawking on it. As befitting his career, the night was weird and odd, yet still captivating.

Squawker Jon and I were at The Mockingbird, a bar in the Lower East Side, having a jalepeno margarita when the pre-game stuff was going on. The bartender was wearing a Yankee cap, so I surmised he would switch the TV to the ceremony upon request. Sure enough, he did.

The skies over Yankee Stadium did look like the world was going to end, yet oddly enough, it didn’t rain at Citi Field — or on the Lower East Side! The ceremony seemed very rushed because of the rain. Funny thing was that it was actually more entertaining watching it without sound the first time, than when I watched it at home again on my DVR. 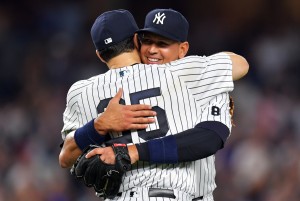 NEW YORK, NY – AUGUST 12: Alex Rodriguez #13 of the New York Yankees gets a hug from team mate Mark Teixeira #25 in the ninth inning against the Tampa Bay Rays at Yankee Stadium on August 12, 2016 in New York City. (Photo by Drew Hallowell/Getty Images)

That also may be because of the element of surprise. Like Yankee Stadium fans did, I cheered when I saw Mariano Rivera come out to escort A-Rod’s kids on to the field. And I gasped when I saw Hal Steinbrenner; I wasn’t sure if he was going to show up or not, so I was pleasantly surprised to see him.

I was on the express bus home and heard John Sterling call Alex’s double, and I heard how excited the crowd was. It sounded like a playoff atmosphere. When I got home to watch the game, it looked that way, too. Each time A-Rod came up to bat, everybody stood up. (Although Squawker Jon noted that Michael Kay tried to minimize that, simply saying that people were standing up to get a better view. Huh?) 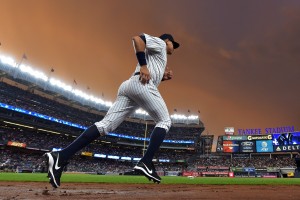 NEW YORK, NY – AUGUST 12: Alex Rodriguez #13 of the New York Yankees runs onto the field to warm up before the game against the Tampa Bay Rays at Yankee Stadium on August 12, 2016 in New York City. (Photo by Drew Hallowell/Getty Images)

Once the score was 6-3 Yankees, after Aaron Hicks’ homer (or Hicksie, as Joe Girardi annoyingly calls him!), Squawker Jon and I were conversing on the phone about when/if Joe Girardi would have A-Rod play the field. And fans in the ballpark were chanting, “We want A-Rod,” hoping for this, too. Jon and I both figured that Joe was going to put him out there, but we weren’t sure if it was going to be at third base or shortstop. (We thought the latter could happen as symmetry for the beginning of his career.)

The reason I bring this up is because YES Network did a terrible job with camera work at the top of the ninth. They saw Alex talk to Joe, run back to the clubhouse, come back with a glove, and what did they do?  Go to commercial! How stupid is that! 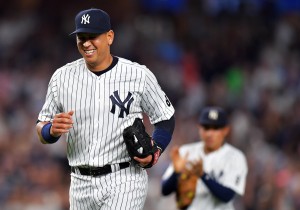 On the other hand, the FOX broadcast of the game (it was nationally televised and was on Channel 5 here) stayed with A-Rod, and showed him running out on the field as it happened. I watched that after the game (I was DVRing both broadcasts) and I got chills seeing the whole thing. The roar of the crowd was the loudest I had heard the stadium all year.

FOX owns 80% of YES, but they *owned* them when it came to capturing that moment. Was only showing the A-Rod moment after the commercial the way the Yankees powers that be were messing with Alex? Good question.

A-Rod played for one batter and then went back to the dugout. Seeing him embrace his teammates after being taken out of the game was really nice. They all clearly seem to like him very much, which is no small thing, given that when he first became a Yankee, he seemed to not be “in with the in crowd” in the clubhouse.

I could see tears welling in Alex’s eyes when he watched the last few moments of the game. But I didn’t cry during any of the events of the evening until afterwards, when he was doing a postgame interview on the field and his daughters ran out to hug him. That made me completely break down in sobs. When I rewatched it today, same thing — didn’t cry at anything except for that.

There was a really nice feel in the crowd for the whole evening, with A-Rod finally getting the unabashed love from Yankee fans that he had always wanted. It seemed like everybody stayed until the end, which is an increasingly rare thing in Yankeeland.

I know some people have snarked about the night, but I think it actually worked. Do you remember Jeter’s or Mo’s farewell ceremonies? Other than Brandon Steiner sitting as an honored guest on the field for Jeter’s, I don’t remember anything! Their on-field farewells were much more memorable. But people will remember both the A-Rod ceremony and the game itself.

I was surprised to see how much Joe Girardi cried in the postgame. Until that moment, I really thought he was the one behind Alex’s Boston benching. Now I’m not so sure, especially since Brian (Fredo) Cashman was nowhere to be seen Friday night. But if Fredo was behind it, the move was about as successful as signing Kei Igawa. It totally backfired, and made A-Rod an extremely sympathetic character. For once, I was in agreement with every sportswriter in town (except for Mike Lupica, of course) that Alex got a raw deal with not getting to start Tuesday and Wednesday.

At any rate, the fact that the farewell event was done at all is pretty amazing, given where A-Rod was three years ago. He could have ended his career like Lance Armstrong, who last year described himself in the cycling world as being like Voldemort — he who must not be named. And not just that: Armstrong raised literally hundreds of millions to help people with cancer, and his own foundation completely cut ties with him and acts like he’s Voldemort there, too!

So you can look at the glass half empty, and wonder what type of farewell A-Rod would have gotten if he had achieved those gaudy numbers clean. Or you can look at it half full, and see that he’s already rehabilitated himself a lot. He can step into the FOX broadcast booth again this fall, and/or work with the next generation of Yankees, instead of living in the limbo Armstrong does. (The link I posted above talks about how Lance acknowledges what a jerk he was for decades and how he has tried to make amends to those he wronged. But it was a little too late to fix his image.)

What’s next for A-Rod? I sincerely hope it does NOT involve playing for any other team. I actually talked Squawker Jon into agreeing with my point: for his whole life, Alex has looked for a “family” situation on the baseball field. He’s admitted that he should have stayed with Mariners’ manager Lou Piniella five or six more years (as in stayed in Seattle and not gone to Texas!) because he would have matured more. Now he’s finally got something resembling a family in Yankeeland as he heads towards retirement. It’s a dysfunctional family, to be sure, more like most of our families than like the Brady Bunch, but Hal clearly respects his baseball knowledge, and he should go with that.

Unlike Derek Jeter, who is supremely self-assured, knows who he is, and what he’s about, A-Rod’s never really had it all together as a human being. But now he finally has things in a pretty good place.  And as time goes on, I think more fans will be on his side if he doesn’t screw it up. (Although Jon pointed out that, like The Scorpion and the Frog story, it’s A-Rod’s nature to mess with a good thing!)

And really, at this point playing again would be anticlimactic. Once he hit 40 last summer, his skills started going, and I think they’re gone for good. I don’t want to see him like 1973 Willie Mays, or making a fool of himself at the plate.

So I know Miami looks enticing, especially now that Giancarlo (eats KitKats like a monster) Stanton is out for the year and their front office is openly talking about getting A-Rod. But I really hope Alex is flattered by the attention, but turns it down and calls it a career. For once, I hope he makes the right decision. 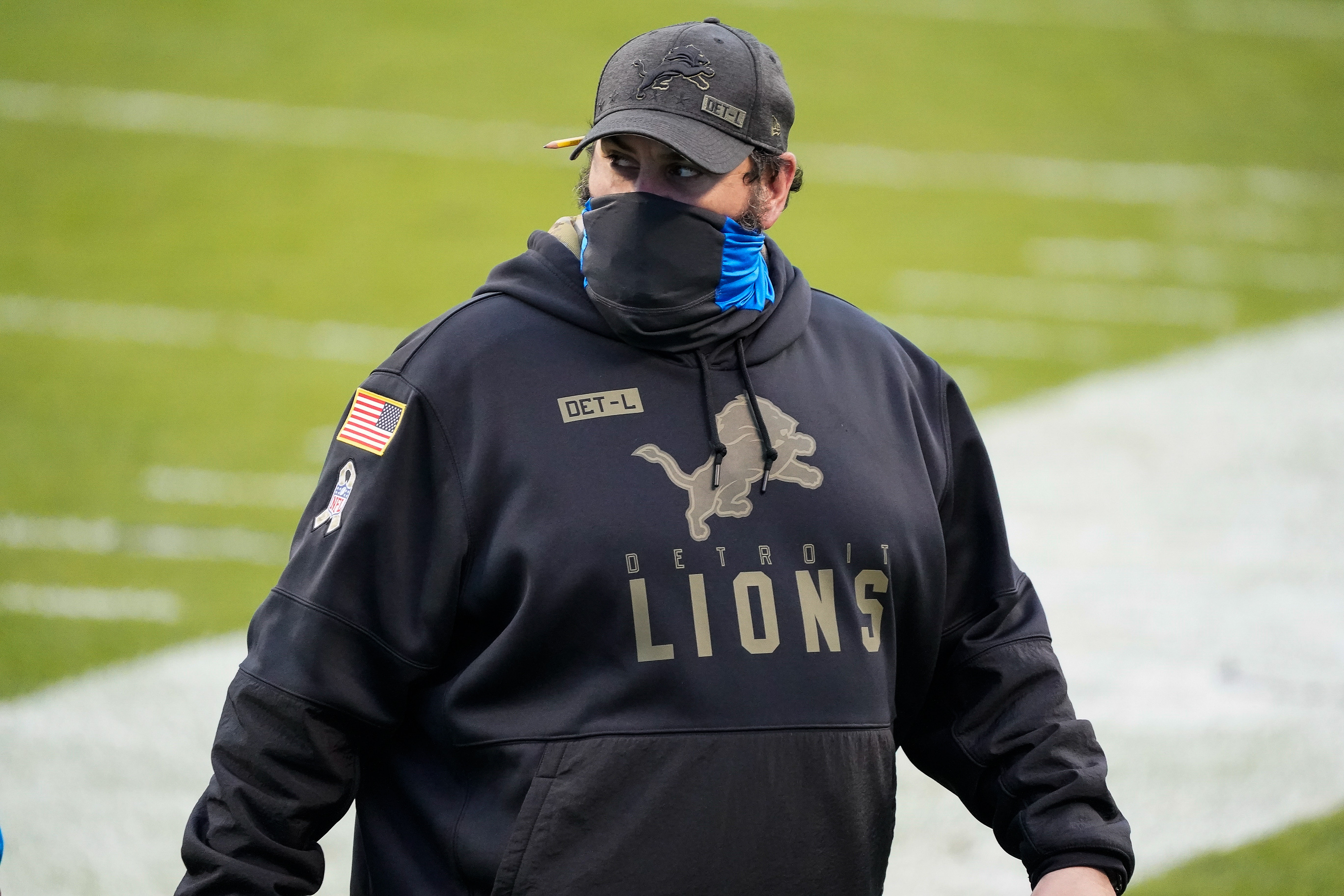