Odd as it might seem, Chris Bosh and the Miami Heat could be headed toward an ugly split.

Bosh has been quite active on social media as of late, trying to publicly reinforce the idea he’s going to return to the NBA and the Heat next season.  Whether or not he plays for Miami next season will have a big impact on their odds at the best sportsbook.

Now we know why.

According to Barry Jackson of the Miami Herald, Bosh and his camp aren’t happy the Heat might try to shed his contract if he isn’t cleared to play:

With Chris Bosh going on the offensive this week, the message to the Heat is clear: Getting salary cap relief for Bosh’s contract, if he isn’t cleared to play, is going to be a mighty contentious struggle.

We’re told the Bosh camp remains frustrated with the Heat’s handling of his situation, and that’s part of the reason Bosh and wife Adrienne have gone on a social media blitz this week. As one NBA official said, Bosh wants the public to know he wants to play amid the Heat’s silence.

It doesn’t sound like a smooth resolution rests ahead. Issues with blood clots have derailed Bosh’s last two seasons and he’s played in just 44 and 53 games in those campaigns. Last year, Bosh was still a force with averages of 19.1 points and 7.4 rebounds per game, but his eventual loss partially helped derail the Heat.

The Heat are quite a different team now with Dwyane Wade gone. Should the Heat not get Bosh on the floor, it makes sense the front office would want to free up the cash to use elsewhere.

Bosh has other plans. Here’s to hoping Bosh comes back at full strength. 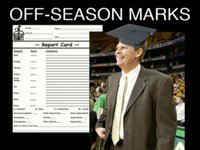 It’s hard to believe, but after a week off we have arrived at the first edition of weekly Oilers links for September. In just a...