When the Tampa Bay Lightning took the ice for their first preseason game there were a lot of young faces making their NHL exhibition debuts. Nerves may have been a factor as they struggled to find consistency in the 3-2 loss against the Hurricanes.

The good news for the Bolts and their prospects is they got more comfortable as the game went on and made things more interesting. It was almost all Carolina through the first two periods as the Hurricanes amassed three goals including the game-winner by forward Jeff Skinner.

Things got a bit more interesting in the third when Brayden Point got Tampa on the board with just under eight minutes to go. Tyler Johnson and 2016 draft pick Libor Hajek earned assists on the tally. Bokondji Imama crashed the net to bring the Bolts within a goal with a little more than a minute left in the game. Joel Vermin and Anthony Cirelli assisted on the second goal.

Kristers Gudlevskis started the game for Tampa Bay and made 21 saves on 23 shots faced. He was relieved by Adam Wilcox midway through the second period. Wilcox made 14 saves on 15 shots.

The Lightning will host the Florida Panthers in their next preseason game Thursday September 29th. Puck drop is set for 7:30 pm at Amalie Arena. 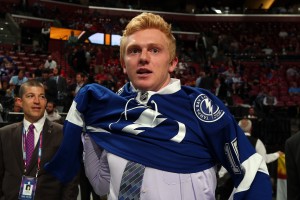 The Lightning have trimmed their roster by 22, leaving 53 players in training camp. Here’s the list of players assigned: FORWARDS (12) ALAIN, Alexandre CIRELLI,...