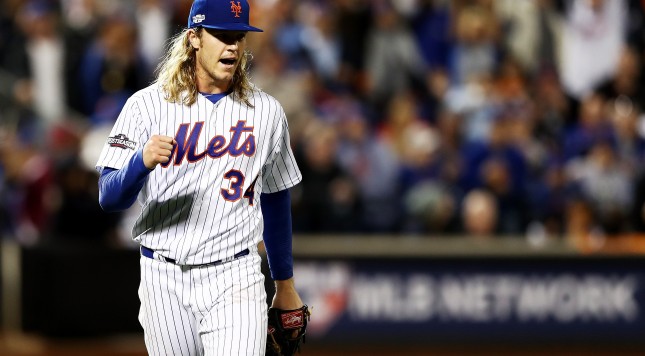 I still like the idea of the wild card game, though I wouldn’t object to a rule banning Madison Bumgarner from such games. Still, it’s weird to see a team fight for a month and a half to get into the playoffs, only to see it end so quickly. But despite the abrupt conclusion, it was a good season for the Mets.

With all the injuries they had, it’s a wonder the Mets got this far. Some of Sandy Alderson’s moves are better than others, but he successfully plugged a lot of holes as the injuries kept mounting.

In the wild card game, the Mets had to face possibility the best postseason starter ever in Bumgarner. Yet Noah Syndergaard matched him through seven scoreless innings, only the second time in MLB history two starters had allowed no runs for so long in a winner-take-all game since the legendary 1991 World Series Game 7 when the Twins’ Jack Morris outdueled the Braves’ John Smoltz.

But as long as comparisons are being made between Bumgarner-Syndergaard and Morris-Smoltz, here are some similarities between Thor and the pitcher on the losing side in that game:

Smoltz, of course, went on to have a Hall of Fame career. Morris got over 60% of the vote the last three years he was eligible. Bumgarner seems well on his way to the Hall of Fame. After last night’s gem, Syndergaard’s future is certainly looking bright.

Thanks to Thor, the Mets were still tied with Bumgarner and the Giants going into the eighth, and Addison Reed held the fort for that inning. If Jeurys Familia had been able to keep the game tied through the ninth and possibly the tenth, Bumgarner would have been out of the game and the Mets would have just as much chance to win as the Giants, if not more due to the Giants’ struggling bullpen. Instead, it was the Mets’ bullpen, specifically their closer, who lost the game and ended the Mets’ season.

As regular readers know, Lisa and I had a chance to meet and interview Familia in June and we really liked him. He’s also a very good closer with 51 saves this year. But while most people were inclined to overlook Familia’s three blown saves in the World Series last year, there has to be cause for concern when his next postseason appearance results in a home run by Conor Gillaspie after Familia only gave up one homer all season. Some people have even made the dreaded comparison to Armando Benitez, great in the regular season but not in the postseason.

The Mets have plenty of issues to deal with before next season, starting with whether or not they can bring back Yoenis Cespedes. If Cespedes leaves, the Mets as currently constituted won’t have to worry about how Familia does in the postseason because there won’t be a postseason.

Even if the Mets had pulled it out last night, there would still be the matter of facing the juggernaut Cubs with only one start from Syndergaard. With all the strong teams in the NL, it hasn’t seemed like the Mets’ year for some time.

So once the sting from last night dies down a bit, 2016 can be viewed as a year with many positives, leaving the Mets still able to hope that next year finally brings another championship.

About Jon Lewin
View all posts by Jon Lewin
Read next

The year was 2014 when defensive tackle Aaron Donald made the NFL Pro Bowl as a rookie, but one head coach did not agree with...