Buckeye State Hockey Roundtable: Who is really the Blue Jackets number one center? 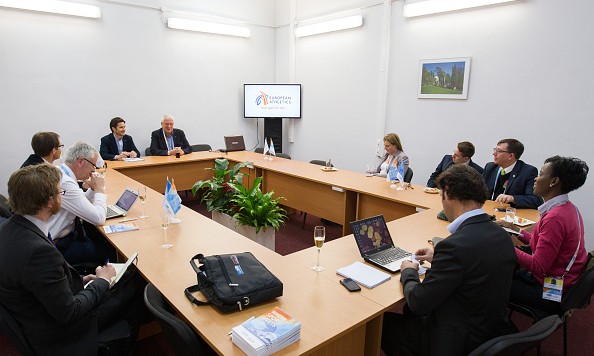 Sam (@Sam_Blazer): The weak point of the Jackets offense entering the season was the position of center. The Jackets just flipped their #1 center for Seth Jones, a good but costly move. At one point it was a position of strength, many are now unsure of how the team stands today. Who really is the Blue Jackets number one center?

Avery (@avery_kreemer): In regards to centers being a position of strength for the Jackets, I think the one place they kind find solace is at least through their depth. They have Dubinsky, Wennberg, Gagner, Jenner, and Karlsson that are all comfortably NHL caliber, and this is an area that was a struggle for the Blue Jackets last season without Gagner and the reliance on Campbell.

But, depth doesn’t necessarily mean that they’re strong on all four lines, and in reality the Blue Jackets don’t have a #1 center. Right now, I think the player closest to it is Dubinsky, but I’ll go out on a limb and say that I expect Wennberg to start taking that responsibility over throughout the season.

Matt (@zekebud): I guess #1 center depends on definition. If we’re talking the team’s top center right now? I’d have to go with Brandon Dubinsky. This is, however, not as weak a leading situation as some would have us believe. Dubinsky is a quietly excellent shot differential player (particularly shot generation), and a great assist contributor. While Dubinsky may lose some attention due to a (relative) lack of goal-scoring, I’m fine with his standing overall (just as long as he isn’t taking awful penalties for cross-checking opposing players in their necks). Combine that with the solid Dubinsky-Atkinson chemistry, and it’s not the worst “first” line situation. I think there’s still room for Wennberg to grow, and he’s my pick for the team’s 2nd center. And I suppose that’s where the issue comes: Wennberg, Jenner, Gagner, and Karlsson are all bigger question marks for me going forward, thus creating the center depth concern.

How Dubinsky fares as he ages, how each of the *next* centers grows, and how quickly Pierre-Luc Dubois comes into the picture will all change the CBJ outlook (although those changes may be over 12 months, rather than in the here-and-now). If wing strength is solid, and defensive improvements become reality? The team might just mitigate the center problems for the 2016-17 season.

Sam: In name, Brandon Dubinsky is the number one center on this hockey team. He is able to fill the hole admirably and he is a player that should be able to pick it up despite the slow start. Wennberg is the future of the center position and thus far he has put points on the board, been a steadying rock defensively, all while looking great while doing it.

The Dubinsky/Wennberg situation is a 1A/1B type deal. Dubinsky is slightly ahead of him for now and as Dubinsky starts going down hill both offensively and defensively, Wennberg is going to take that spot away from Dubinsky. It may happen this year, it may not, if Dubinsky’s small sample size is any indication, it may be sooner rather than later.

Mark (Twitter formerly known as @RedditCBJ): No one is. The CBJ don’t have a #1 center. Who is their best center? Probably Brandon Dubinsky An NYC battle to the death

OR a dance off, Russian Cossack category. (This timely post is courtesy a file photo I saw here)