The Next Guys Up for the Sabres by @evancdent

The Next Guys Up for the Sabres by @evancdent 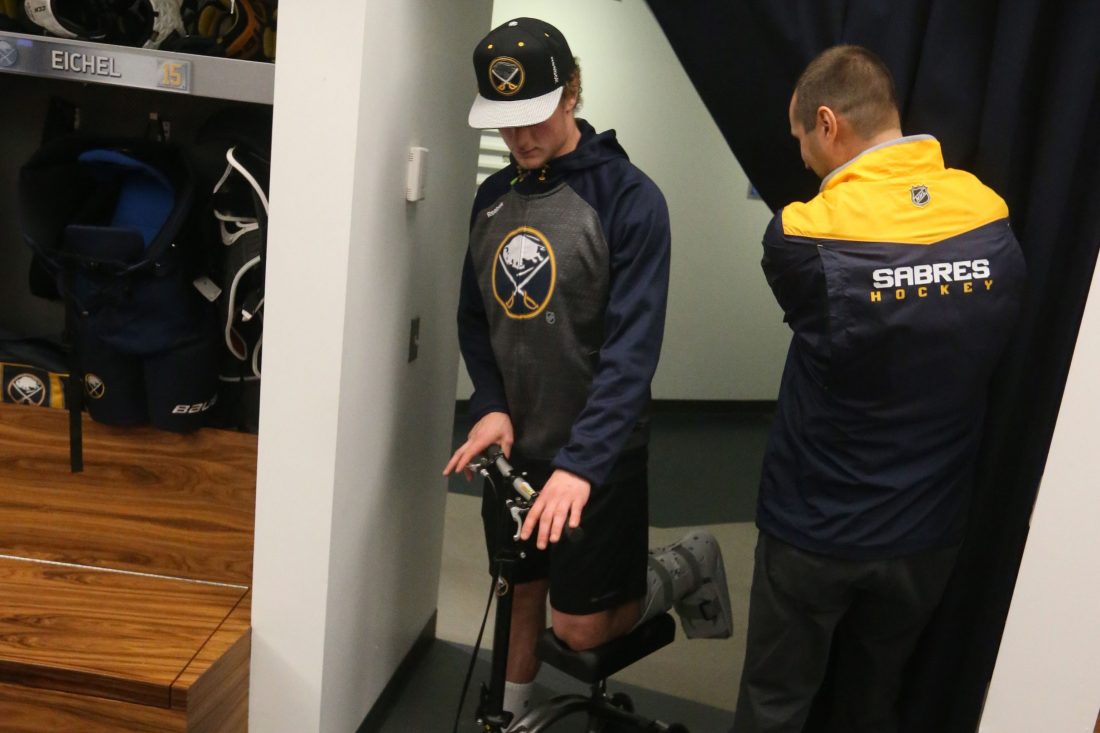 The Sabres season started off in a decidedly … not good at all fashion. Jack Eichel suffered a high ankle sprain in practice, an injury only slightly easier to return from than straight up amputation. And during the season opening 4-1 drubbing at the hands of the Habs, Evander Kane flew into the boards and suffered three broken ribs, an injury consistent with a car crash. Every team will suffer injuries, but to lose two top six forwards – one of whom is expected to become the team’s best player sooner rather than later – in less than a week is piling it on. Fans stepped off the ledge with a 6-2 drubbing of the Edmonton McDavid-and-Nobody-Elses-Like-Seriously-Nobodies, with huge performances from Ryan O’Reilly, free agent acquisition Kyle Okposo, and the recently reu-pped Rasmus Ristolainien. (Fans didn’t know what to do on the ledge after a overtime loss to the Flames, but I digress.) But those guys are expected to play well – that’s why they’re paid the big bucks. So who else will have to step up for the Sabres to weather the storm for the next couple weeks?

Ok, this one is kind of cheating, because we all expect great things from Sam Reinhart and most of Sabres twitter has a huge crush on him. But with Eichel out, we get to see the former #2 overall pick in a more prominent role, whether he continues to play on a stacked first line with O’Reilly and Okposo, or whether he eventually takes the second line center spot. He doesn’t have the panache or speed of Eichel, but his passing is second to none (seriously, check out his assist on Okposo’s goal on Sunday) and it’ll be exciting to see if he can continue to grow as an all around force.

While Larsson has had a slow start to the season offensively with just 1 assist, he’s currently acting as the team’s number 2 center and getting close to nineteen minutes of ice time per game. Dan Bylsma is clearly comfortable with putting him on the ice in any situation, and attentive fans can see why – Larsson is especially adept at making small, net positive plays, whether winning a scrum or making a nice outlet pass, and, at least to my eyes, his skating and transition play have looked very good to start the season. He’s shown flashes of offensive potential, particularly late last year, and with the top 6 injuries is now getting enough ice time to start putting up points. While less heralded than Latvian hero Zegmus Girgensons, Larsson may just end up taking his role as a defensively responsible center with offensive upside, which would be a great for the Sabres long-term outlook.

Hahahahahahaha, just kidding. These guys have each scored two goals through the season’s first three games, but it’s going to take a lot more for me to put my trust in two players on the wrong side of 30 being consistent offensive presences. Anything the Sabres get from them is a bonus, not a feature, though they will benefit from increased ice time while the stars are indisposed.

Fasching is the most likely to stick around even when Kane and Eichel are back, mostly because of his size. It’s been fun to watch him play behind the other team’s net, regularly shucking off smaller defenders to keep the puck cycling. However, his offensive upside is limited, and it’s hard to see him putting up a lot of points unless there are – and here I’m knocking on every wood surface in a three-mile radius – more injuries. Fasching will get limited minutes, and while he may not offer a ton, he also is rarely a liability.

Where Fasching is lacking, the other two have it in scads. Baptiste was called up from the AHL to be the Sabres 13th forward, while Bailey is still playing for the Amerks, and both could be solid depth contributors if the Sabres need more help scoring. I like Bailey’s offensive skills more than what I’ve seen out of Baptiste, but maybe the Sabres dig Baptiste’s two-way game in a 13th forward. If career AHLer Derek Grant loses his opportunity, one of these guys will probably step in. I think the Sabres will hesitate to bring this year’s first round pick, Alex Nylander, up to the NHL before he’s properly seasoned.

Boy, Tyler Ennis sure has an opportunity with Eichel and Kane out. If he can simplify his game a little bit and stop trying to do too much with the puck, we could see a return to his 20 goal form. (Copy and paste this last sentence for use in next year’s season preview.)

Problem is, Tyler Ennis has shown no signs of changing his game. When he was getting a ton of ice time on the tank squad in Ted Nolan’s less rigorous system, he was able to put up back to back 20 goal seasons, but that doesn’t mean he was playing any other kind of game – Tyler Ennis will always be skating east to west and trying to deke out the entire opposition before attempting a flashy pass, and I think we ought to just accept that. Bylsma doesn’t seem to trust him defensively – and, though he’s not Cody Hodgson level bad, why would you – and I’m not sure Bylsma is going to give Ennis the extensive ice time he needs to get back to his 45-50 point range. Right now he’s playing a third line role with less talented players, and I don’t see him getting more time than the Foligno – Larsson – Gionta line, so he’ll continue to be the mostly frustrating but occasionally brilliant player that, admit it, he’s always been. It’s not terrible to have a guy like that on your team, but they have to be deployed selectively. When Eichel and Kane return and Bylsma spreads out his talented lines, I think Ennis will get a shot at top 6 minutes, especially if he can play with a defensively responsible set of linemates in Okposo and O’Reilly; until then, I’m not holding my breath waiting for him to become the type of player that he’s clearly not. (Psst; The same pretty much applies for Zegmus Girgensons – a player who might score with tons of ice time – but he has far less offensive upside. Not expecting too much from Z, especially when Larsson is doing Z better than Z can.)

Early returns on the Sabres defense have not been great, though they did shut down Edmonton for two periods. McCabe has appeared to make strides early on in the season, looking like a more confident player in his outlets and transition game, and Bylsma is rewarding him with 20 minutes of ice time per game, although those numbers are skewed a little bit by Dmitry Kulikov missing the Sabres opener. (McCabe went from 22 minutes in the first game to 19 in the second – but around 20 a night will probably be the norm, especially if Bylsma is serious about keeping Ristolainen more rested. McCabe got 21 minutes in the Sabres’ third game, so this seems like a trend that will keep up.) The Sabres desperately need puck-movers on the back end, and if McCabe keeps improving, the Sabres will be able to manufacture offense through his heady offensive game. Eichel and Kane were adept at starting the rush and advancing the puck through the neutral zone, and with them gone, McCabe will have to shoulder more of the load.

So there you have it, folks, the players to watch out for as the Sabres attempt to keep the faith during trying times. If any of them are able to massively succeed (as Rex would put it), it would be a nice silver lining to a grim start.