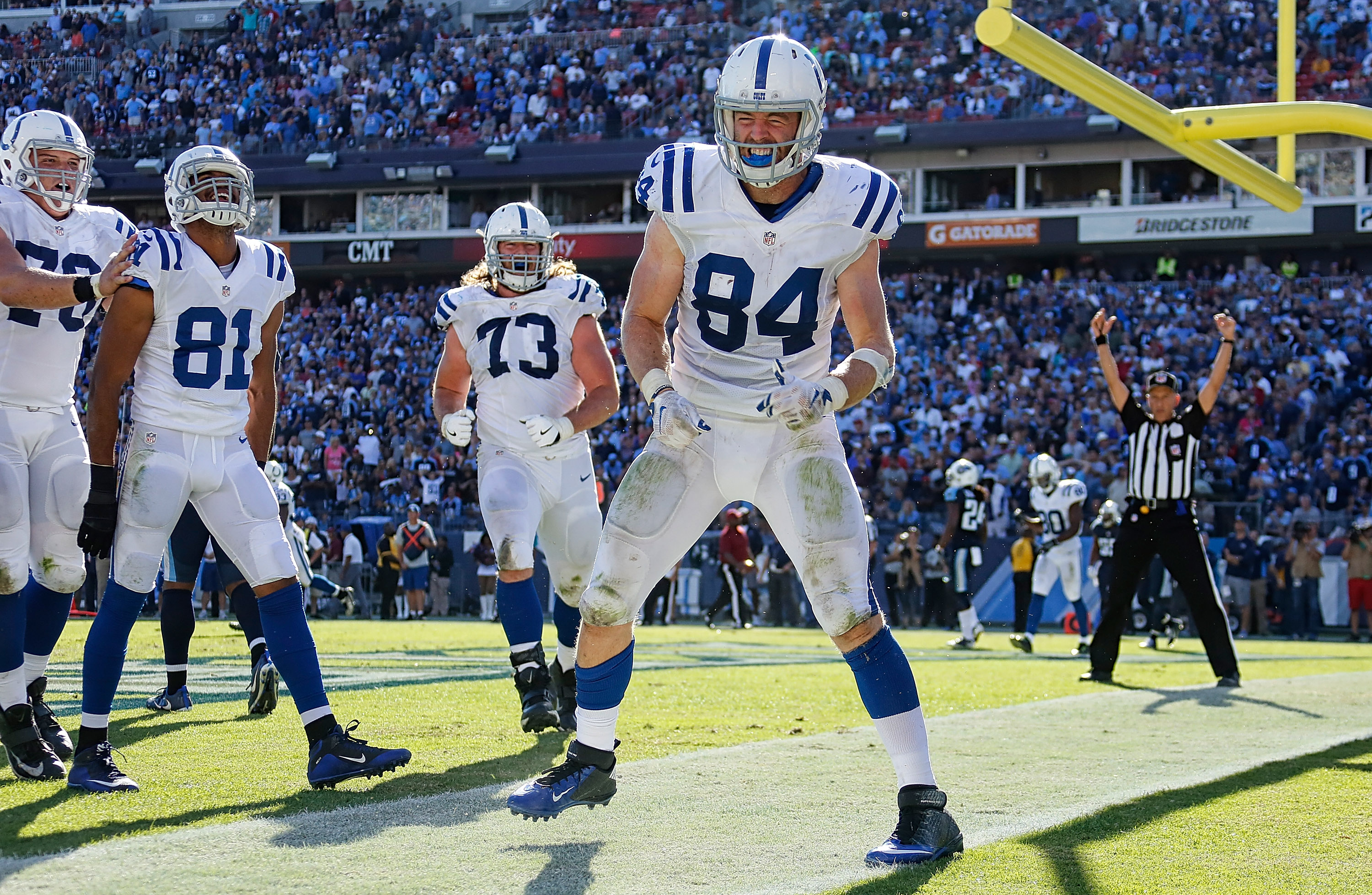 “Andrew threw the heck out of the ball,” Chuck Pagano said after Andrew Luck stayed undefeated against the Tennessee Titans. Luck had one of the best games of his career and is quietly starting to put together a MVP caliber season.

Luck’s seven main passing options included two undrafted rookies, two players who were making their 2016 debuts and a tight end who had never played football at any level just a couple years ago. They were facing a top-10 defense who had six sacks each of the last two games.

“He’s playing well. He’s making great decisions,” Pagano said of Luck. Pagano should have plenty of good things to say about Luck because he very well could’ve saved his job on Sunday.

Luck was 27-for-39 for 353 yards, three touchdowns and no interceptions. His numbers could’ve been even better if it weren’t for five dropped passes, including a dropped touchdown by Jack Doyle.

Once again, Luck was great throwing the ball deep down the field. He was 5-for-6 for 121 yards and a touchdown on passes 20+ yards in the air. Those are great numbers for anyone, especially a quarterback with very few weapons.

The things that Luck has been able to do with what he has around him is pretty remarkable. The lack of weapons, lack of a running game and the always changing offensive line hasn’t given him much help.

“Again, we had opportunities and we didn’t play well towards the end of the first half, we had an opportunity there for a 10 or 14-point swing possibly, Pagano stated when asked about the Colts being able to put teams away.

I mentioned how Luck is doing his best right now to help Pagano stay employed with the Indianapolis Colts. The way Pagano coached his team late in the first half is a prime example of how he continues to hold Luck and this team back.

The Colts moved the ball well in the first half with Luck being on fire. On 4th-and-1 at midfield late in the first half Pagano decided to punt the football. He didn’t trust his offense that had been moving the ball to get a first down.

The Titans next possession Pagano called a timeout on a third-down play to stop the clock. Chuck decided to trust his 28th ranked defense that hasn’t stopped anyone late in halves this season. The Titans converted the third-down and eventually scored a touchdown.

Indianapolis has a quarterback currently playing at a high level and the greatest kicker ever who’s kicking footballs better than ever during this season. So, when the Colts got the ball back with 34 seconds and two timeouts left what did they do? Kneel the ball of course.

Pagano trusts his defense to get a stop more than he trusts his offense to gain a yard or possibly get points late in the first half. Maybe he would be a good coach for the Denver Broncos?

“Yeah, it’s kind of like, I want to quit talking about it, it’s kind of like fast starts. We’ve been talking about those for four years,” Pagano when asked if there was anything they could do that they haven’t to try and minimize penalties. The Colts are an undisciplined team who are penalized way too much and Sunday was their worst game of the season.

The Colts committed 12 penalties on Sunday and have been flagged 64 times on the season. They had the least amount of penalties in the NFL in 2013. The Colts are only three penalties away from having more penalties than the 2013 team did the entire year.

Josh McNary had a bad penalty where he leveled Delanie Walker for no reason while Patrick Robinson made a great play on the ball for an interception at a crucial time in the game. For a team that struggles forcing turnovers they can’t have silly penalties that negate them. McNary never came off the field and allowed Walker to retaliate by burning him badly for a touchdown.

“We don’t have cheap shot guys on this football team. That’s not Josh. That’s not any of our guys. There was no malice there. It was a bang-bang play, the guy was reacting to what he thought he saw and it was unfortunate. That’s not him, that’s not our football team,” Pagano said about the play by McNary. I don’t believe McNary tried to hurt Walker either, but I’m willing to bet that Walker would disagree with Chuck. Remember when Erik Walden headbutted a helmetless Walker in Tennessee a few years ago?

The Denver Broncos defense didn’t have an epic collapse on Monday Night Football against the Houston Texans like the Colts did a week ago. Indianapolis is tied for second in the AFC South and thanks to the Broncos are now a game back from first place.

Pagano didn’t have any news on injuries Monday afternoon. We should know more on Tuesday. It sounds like Jack Mewhort and Phillip Dorsett could possibly be back in the lineup against the Chiefs.

All Quotes Courtesy of the Indianapolis Colts PR Department