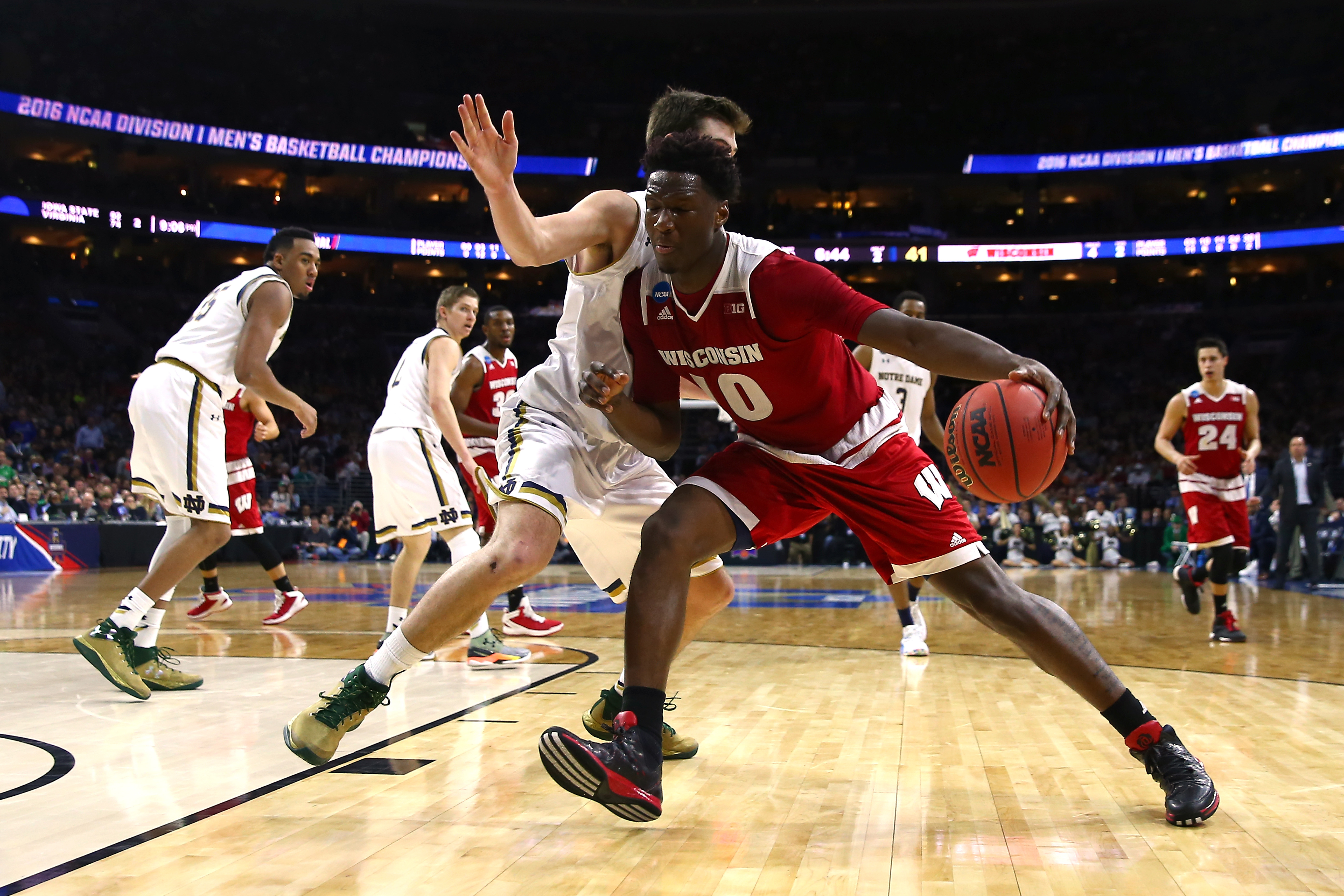 The Wisconsin Basketball season is right around the corner, so I’m taking a look at every scholarship player on the roster. First was Bronson Koenig, and second was Zak Showalter. Now, it’s time to break down expectations for the most interesting player in college basketball, Nigel Hayes.

Last season was quite the roller coaster ride for senior forward Nigel Hayes. Despite being named to the First-Team All-Big Ten, he struggled on the offensive end the entire season. While he did average a team high 15.7 points per game, he averaged 2.3 turnovers per game, only shot 37% from the field and 29% from 3. That is a steep drop in effciency from his sophomore season, when he shot 50% from the field and 40% from 3.

Many fans believed Hayes’ shooting woes would be temporary, and he would return to normal after becoming more comfortable with his new stroke. However, it never improved. Over the last four games of the season, Hayes was 11/54 shooting, and 2/21 from distance.

Although it was extremely frusturating to watch him launch brick after brick, Hayes was a steadfast leader. After the Northwestern loss, he called out the team for their lack of energy and effort, and that marked the turning point of the season.

1. Will he keep settling for jump shots?

I really, really hope not. When Nigel Hayes stands out on the perimeter and launches three after three, he is the most frustrating player in college basketball. Despite being such a difficult matchup around the hoop, he tries to play like he’s Kobe Bryant.

When Nigel Hayes is posting up or driving to the basket, he is the toughest player to guard in college basketball. He has phenomenal post footwork, good touch around the hoop, and knack for drawing fouls. He is also excellent at passing out of the post, leading to a team high 3 assists. Hayes in the post is a Naismith Award Candidate.

The difference between Hayes attacking and creating and Hayes launching jump shots is astronomical, and which one we see more of is probably going to be the biggest determinant of Wisconsin’s success this season.

2. Will his shooting and efficiency improve?

Even though I want Hayes to take less jump shots, he is obviously going to have to take some. Knowing Hayes’ competitiveness, there is no way he was happy last season, and he definetely spent a lot of time working on it during the off-season. Hopefully his shooting percentage will look more like his sophomore season and less like last season.

3. Will he be used as much as last season?

Last season, Hayes played a conference high 36 minutes per game. Fatigue may have been a major factor in both his shooting percentage and shot selection. It’s much easier to settle for jump shots than is to drive when tired. With Wisconsin having it’s deepest team in years, Hayes should get more rest.

Nigel Hayes is the biggest X-Factor on the team. If he plays like he did as a sophomore (a strong inside pressence that did most of his damage in the paint and at the line, but could hit the open jump shot), then Wisconsin could win the National Championship.

However, that is nothing more than a dream at this point. In Wisconsin’s annual Red-White scrimmage, five of Hayes’ eight shot attempts were from beyond the act. Hopefully that means nothing, but it looks like Hayes is going to keep settling for jump shots. Sigh.

Despite that unfortunate realization, Hayes will still be an improved player from last season. First of all, his jump shot will be better. I mean, it can’t get worse, right? Please, for the sake of my eyes, let it improve. In all seriousness, Hayes is a hardworker with lofty goals. There’s no chance he comes into the season without a much more consistent stroke.

In addition, Hayes will no longer have the burden of having to carry the offense. Last year, he forced a lot of bad shots. With the rise of Bronson Koenig and Ethan Happ as capable offensive playmakers, those days are in the past. He doesn’t need to be Frank Kaminsky. He can just be Nigel Hayes. Getting the chance to relax and take what the defense gives him instead of having to play hero ball will help his efficiency a lot.

EAST LANSING, MI – FEBRUARY 18: Nigel Hayes #10 of the Wisconsin Badgers drives past Denzel Valentine #45 of the Michigan State Spartans in the first half at the Breslin Center on February 18, 2016 in East Lansing, Michigan. (Photo by Rey Del Rio/Getty Images)

Hayes will also continue to be the leader of the team. Every team, no matter how good, has to deal with droughts, injuries, or some other challenge.  The 2013-14 Badgers lost five out of their last six games at one point during their Final Four season. The 2014-15 lost starting point guard Traevon Jackson for two months. At some point, this Wisconsin team will face adveristy in some form. When they do, we can be thankful that they have a leader like Hayes to help them get through it.