Ducks try to exorcise losing mojo in battle with the Devils 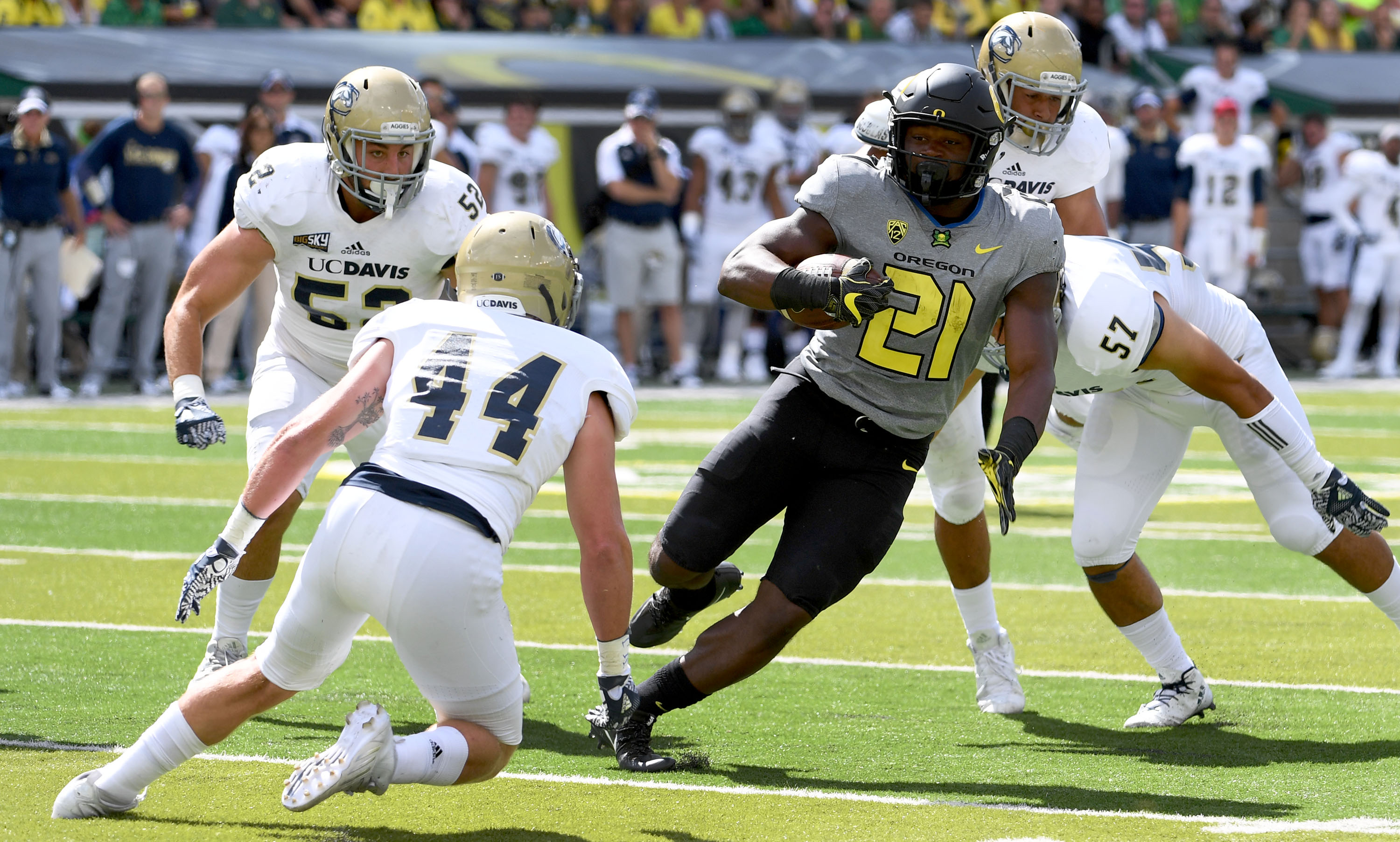 Ducks try to exorcise losing mojo in battle with the Devils

The Oregon Ducks football team will enter this Saturday’s game against Arizona State in desperate need of a win. Oregon has lost five games in a row and is a winless 0-4 in Pac-12 conference play. ASU is also needing a win. The Sun Devils have lost three of four after starting the season 4-0. Here’s a preview of the offenses and defenses for this week’s game:

Left a good job in the city: Royce Freeman hasn’t exactly been rolling on the river in 2016. Sophomore Tony James has supplanted the two-time all-conference player at lead running back. (Photo by Steve Dykes/Getty Images)

Oregon’s success on offense this year has mostly come on the ground. The Ducks are 20th in the nation in rushing averaging 248.4 yards per game. Southern California native Royce Freeman, who was highly touted as a Heisman candidate early in the season, is looking to bounce back this week. Freeman has struggled with injuries for much of the year. Tony Brooks-James carried the load for the Duck last week with 115 yards on just 15 rushes. Freshman Jake Herbert will make his third consecutive start at quarterback for the Ducks.

ASU enters this week’s game with uncertainty at quarterback. Week one starter Brady White is out for the season. Backup Manny Wilkins, a sophomore, left last week’s game against Washington State early with a shoulder stinger after injuring his ankle the previous week. Wilkins was replaced by freshman Dillon Sterling-Cole, who managed just 7-16 passing for 84 yards.

This week’s starter at quarterback hasn’t been announced yet.

To try and compensate for the loss of offense, in the WSU game the Sun Devils relied on trick plays and used their Sparky Formation (don’t call it The Wildcat) with direct snaps to tailbacks Demario Richard and Kaelin Ballage.

Most betting agencies have the over/under point total for Saturday’s game at 78. The biggest reason why people are predicting a high scoring game this week is that neither Oregon or ASU have strong defenses. Out of 128 Division I-A football teams, the Ducks rank dead last allowing an average of 539 yards per game. The ASU defense isn’t much better. The Sun Devils are ranked 120th in the nation allowing an average of 486 yards per game.

Oregon’s defense is struggling to stop both the pass and the run. The Ducks rank 118th in the nation in average passing yards allowed per game at 290.1 and 120th in the nation in rushing yards allowed per game at 248.4. A major problem for the Duck defense is youth. As Andrew Greif of the Oregonian point outs, the Ducks’ defensive depth chart is loaded with freshmen and sophomores who have struggled to make big plays this season.

ASU’s poor defensive rating has a lot to do with the passing yards the Sun Devils have surrendered this season. ASU is dead last in the nation in passing yards allowed per game at 386.1. But, as ASU beat writer Doug Haller explains in an interview with the Oregonian, ASU has faced three of the most pass-happy teams in the nation: Texas Tech, Washington State, and California. Haller says the ASU secondary is making steady improvements.

If you like high scoring games where defense is optional, then Saturday’s game between ASU vs. Oregon should draw your interest. The game starts at 2pm PST with TV coverage on the Pac-12 Networks.