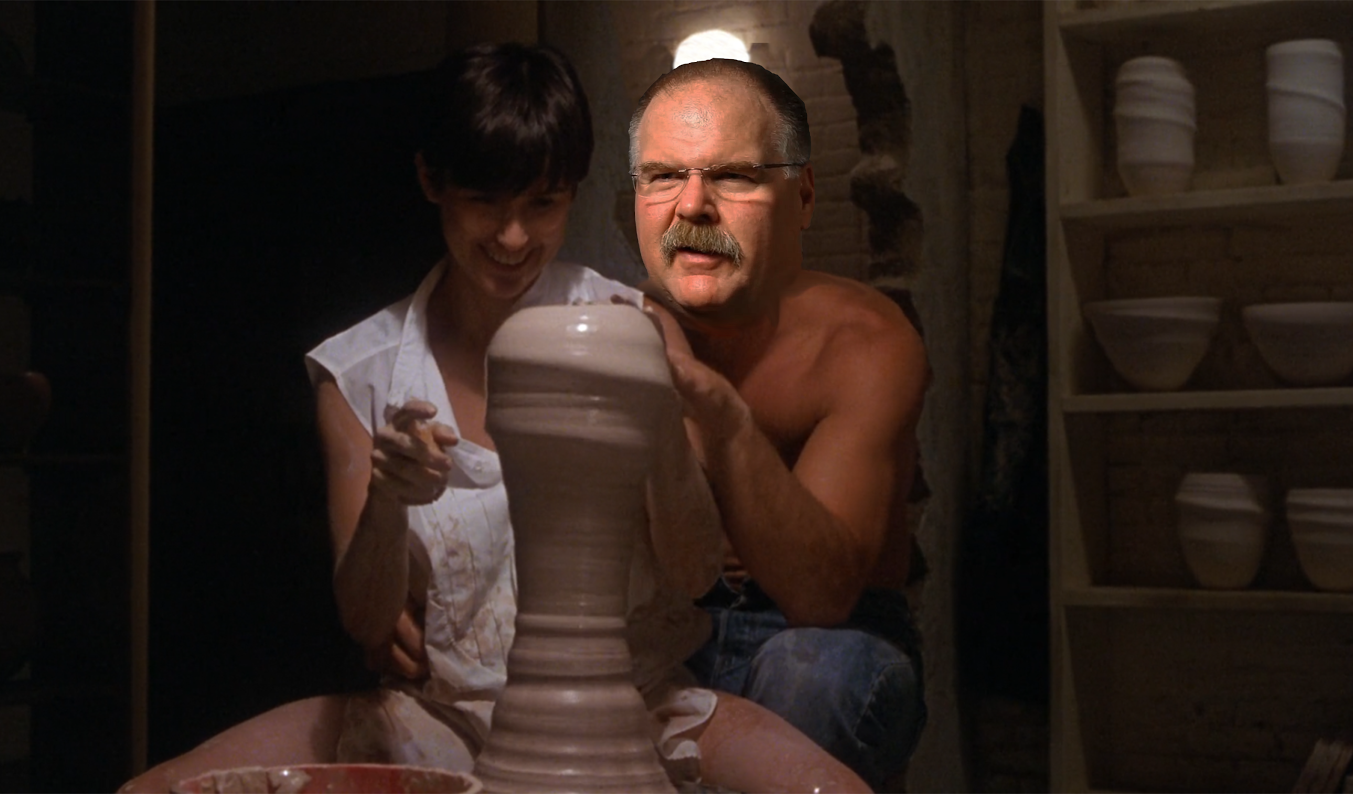 Who: The Kansas City Chiefs vs. The Indianapolis Colts.

When: 1 PM Eastern, Sunday, October 30. We have finally reached rock bottom, folks. This match up is so unappealing CBS has assigned their worst crew to call it. I wish I was joking. If there’s a plus side, it’s this: Solomon Wilcots, baby! For other action you can check listings here.

(The only things I changed in the “When” section from last week are the date and the link to the regional coverage. That’s right, Solomon Wilcots in the house again, baby!)

1. The Ghosts of Colts Victories Past:

It’s late Saturday night. Content with his game plan and finished with his fourth room service meal of the evening following the team dinner, Andy Reid lumbers to his hotel bed and flips on the TV. Scrolling through channels, he finds WTBS is airing “Ghost,” starring Patrick Swayze and Demi Moore. “My favorite movie!” Reid exclaims.

Comforted by his full stomach, Reid is soon barely able to keep his eyes open. “Ahhh….Demi….pottery” he mumbles with a smile, before falling asleep.

Look at the following disturbing image. Then look at it again, because you can’t take your eyes off of it. Click to enlarge if necessary.

“Do you recognize me?” asks a figure draped in chains.

“Yes, Andy, it is I, Bill Walsh, your mentor, forever feeling doomed by your poor clock management and inability to win a big game. Look at what you’ve done to me.”

“But what happened to Demi?? I was jus-”

Disturbed but chalking it up to just a dream, Reid is about to fall asleep again, visions of Demi Moore in his head.

Here, look at this again:

“Ooooh…oooooh…ooohhh!!” come the ghost-like sounds of a mist wearing a blue #12 jersey.

“Hi, Andy, it’s Andy. Hahaha, I love doing that. Do you know you’ve never beaten me in three tries? You’ve done some good things against us, but then I just go out there and make $#$%$% plays and – Whoops, sorry kids. I apologize for my heat of the moment profanity – win the game. You even let us fumble the freakin’ football and still score. When you get the lead this time, don’t ease up. Hell, I’ll bet if you bring pressure off my left side it will bother Castonzo and throw our game plan totally off. Oh yeah, and you should double cover TY Hilton because he’s just…”

Though shaken by the mysterious appearance of Luck, Reid is soon back to sleep again.

“Huh? Wha? Yeah, I’ll have the loaded nachos and the chili dog, and..”

“That’s right. TY Hilton, The Ghost. You know you’ve never beaten me in three tries? In each game, I’ve played better and better against you. Remember this?”

Reid jumps out of bed.

Wide awake, Reid takes out his notepad and begins to scribble out some plans for the game, when…

*sound of wood being chopped*

A man carrying an ax and dressed as a lumberjack appears out of the blue.

“That’s right, Andy. What’d I tell you? I said I’m 3-0* against you, we’re meeting again, so what, now what? Now you remember I’m going to inexplicably give you a time out which gives you the extra time needed to score. Now you remember to trust the process, to keep grindin’, to keep choppin’. Now you remember to double cover TY Hilton, even though he’s just a #2 receiver. Also, try the oatmeal at Mann’s. It has a lot more grit to it now”

After being unable to sleep the remainder of the night, Reid calls a meeting with his defensive staff.

“Alright guys, last night I had a vision. I thought it was going to be about Demi Moore and pottery, but it wasn’t. Three ghosts came to me in my dreams and told me how we could win-”

“Yes, but guys, I think we ought to consider doubling TY Hilton..”

As the game unfolds, everything seems to go the Chiefs’ way, and soon they lead 38-10.

But the Colts aren’t done. Andrew Luck figures out the Chiefs are blitzing from his left on every snap, he starts making $@%$@$ plays – Whoops, sorry kids. I apologize for the heat of the moment profanity – and the Colts storm back to within 41-38 with 10 minutes left.

The Chiefs melt away nearly 5 minutes off the clock in a drive that culminates with a field goal, pushing their lead to 44-38.

After the ensuing kickoff, the Colts take over on the 20. A couple of plays gain 5 yards, but on 3rd down Luck hits Jack Doyle for 11 yards and a first down.

Luck takes the next snap, he looks, he looks….then fires a bomb down the middle to his open #2 receiver TY Hilton, who blows by the defense on a post route and completes what turns out to be the game winning the 64-yard touchdown.

As Reid and Pagano meet at midfield afterwards, Pagano greets Reid with a wink and  “I told you the oatmeal was good” before vanishing into thin air.

Reid walks off the field when suddenly he hears “Andyyyyyy” through his headset.

I have no idea what any of this means, but